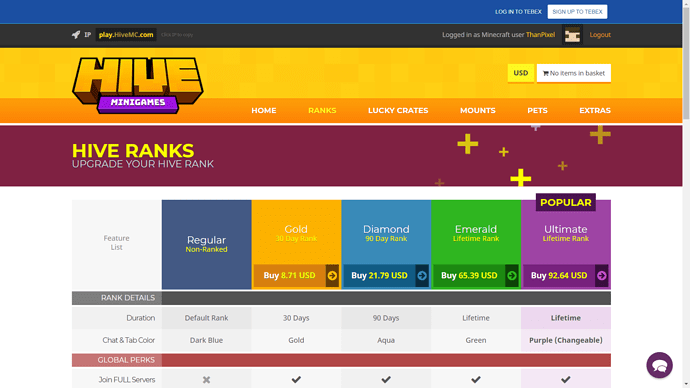 2020-02-261920×1080 198 KB
These ranks range in price from around $9 to $93 (€8 to €85) Adding new ranks to the bedrock version would allow for players to distinguish from normal players and dedicated players. There could be, like the Java Edition, 4 ranks that could be available for purchase. Hive+ could be the basic rank. This could also allow for more features such as /nick or ranked lobbies. This would also allow for more donations to to server. What do you think? What do you think the ranks could be called? If you disagree with me, please don’t be toxic, just discuss.
New Rank Hive++
Add more ranks to hive
thegamingtoyYT February 26, 2020, 9:08pm #2

Honestly though a 93 dollar rank for hive would make them look terrible.
Like that model works for Java alright since Java players generally have more money, but doing this here would make it kinda bad, if they made it so the main experience wasn’t destroyed, it would work

It would look bad in other’s eyes, if they made the ranks so the initial free experience was still intact it could work, but some dude who plays pocket on an acatel isn’t going to buy that, nor would most mobile and a decent amount of console/PC players, I honestly just think they’d have a higher rank if they knew it wouldn’t work.
Also you’d have to make it so getting the 50 dollar rank from the 30 dollar rank isn’t 50 dollars, which is hard to do in MC bedrock

I feel like maybe a higher rank, or two, would work, but four total seems like too many, in my opinion. Don’t get me wrong, I was a tad underwhelmed with what Hive+ had to offer (although it was cheap for a lifetime rank) so it would be nice to have some other perks, I’m just not sure you’d be able to come up with enough perks to warrant so many ranks.

Personally I don’t think chat commands like /nick are super useful because typing is incredibly awkward on consoles, though I’m sure most players buying ranks will be on PC. Also, with /nick specifically, that seems like it’d create a lot more problems than it’s worth, with people nicking as silly names, for example.

I’d definitely like to see another rank or two but it really depends what you can think of that the Hive could offer. Access to more unique costumes is something I’d like, and ranked games sound fun but leaderboards already exist and creating different lobbies for ranks would just spread the players. Maybe the ability to create custom, friend-only lobbies?

I agree. One or two more ranks would definitely be better!

Why? There’s no point.

Maybe a rank for private games?

They could do up to 20 dollars probably, and then offer a 10 dollar hive+ to hive++ or whatever

Alternatively they could make a rank that’s paid monthly and then a lifetime rank? So Hive+ would be worth a bit more but would offer more perks whereas the lower tier monthly rank would offer fewer perks you can only use while the rank is active.

I feel like Hive has absolutely and are absolutely considering it. The thing I’ve noticed most about the Hive is they perfect everything they do! They don’t move on until 1 thing is done. If they add something like that it won’t be for a bit of time. Private lobbies would be amazing!

I feel a private lobby would be a bit of a disadvantage. Even with so many players on the Hive, a single lobby would have to be in-between certain regions for the best connection. Staff would more than likely get transferred into there, but at the same time it would also mean a lack of staff on the generic lobbies that are as of current.

I guess it depends how you’re looking at it? I’m assuming the ability to create private game lobbies would work along the lines of Java’s private SG lobbies - Stats are not saved and you can only join via invite. So since stats aren’t saved and it’s purely for fun between friends, I don’t imagine anyone would be at a particular disadvantage.

In terms of connection, I suppose you’d open the lobby in whichever region would be best for you and your group of friends. :o

Private lobbies will be a part of swarms, so the ranks won’t be able to do that

I don’t think this is a good idea. It will cause in outrage in players with hive + if their perks were nerfed in order to make room for a rank with the same perks cost $30.