We all agree diamond armour is OP. It is difficult to beat, and it’s easier to beat a full kill aura fly hacking bhopping nerd than it is to kill a dude in full diamond.

My propositions and how to adress the matter

I’ll edit with suggestions that could work too

Having diamond armour is part of the game. If it wasn’t in the game, there would be a people who complain about it NOT being there because it is such a fun and different way to play the game.

If you play right, killing someone with diamond armour isn’t too difficult, KB is such a vital aspect in TW.

I really want diamond armor to be nerfed, at least more expensive, because now diamond armor is just to easy to get, you just have to camp 5 minutes at middle to get 32 emeralds and buy the diamond armor. Maybe 38 or 40 emeralds would be better ? I have played many games, and they sometimes lasted for very long, so 8 emeralds to get would just be a little bit harder.

You just don’t know the match up bro, and it would never been used and doing all that would make it difficult to clutch a game out.

Having diamond armour is part of the game as miner said. But when dying loose it entirely or downgrade? If that were to happen, not a lot of people would even play TW anymore. Diamond armour was made to be tough because its the best armour in the game. Just be glad no enchants are added. Plus, its easy to kill someone in diamond armour (and no, I’m not saying with a bow.) And out of everything else in TW shop, pst. Diamond armour is the most expensive thing. I’ve killed people in full diamond with iron or chainmail. Just get a iron or diamond sword and finger-spam that mouse or controller or…screen.

@Demon_Wolf_Fang Yep. You’re 100% right there. Diamond armour made TW. So long as you know how to deal with people on it, you can kill people with it. All you need to do is use the best tactics you can do.

Pretty much. I know there’s a post on TW tactics and don’t remember if I posted on it or not.

I agree that diamond armor should be nerfed, but imo they should just make it half diamond, half chain/iron instead of these. Making it expensive would make it even harder to play catch up if someone else gets it, and downgrading would be frustrating

If that were to happen more people would complain. That’s literally just taking away the TW purpose and what its meant for.

Diamond armours are now 32 emeralds? I thought it was only 20, haven’t played a while so maybe they did change it.

Oops ! Sorry ! Diamond armor is 20 emeralds, not 32…
So I think the Hive should make diamond armor a bit more expensive, like 5 emeralds more, so it’s 25 emeralds. So it would be harder to buy.
Proof : 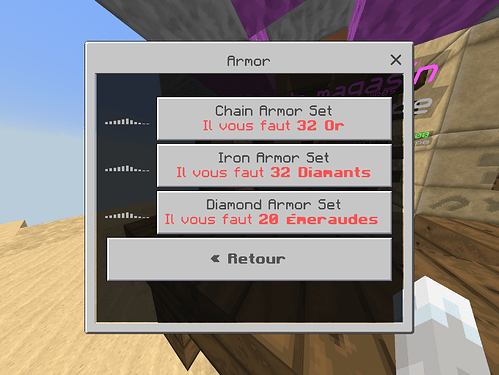 Thanks for clarifying that up!

Knockback might be inconsistent, but if you get enough hits, even with your fist, KB is an attribute that can win you a fight.

Maybe make some of the pieces of armour chain or iron, to even it up a bit.

5 emeralds more is nothing really. I think honestly the best idea of them is to cap emerald generators so it never spawns more when 2 are laying there.

Yes. Yes it can. And the way I deal with these people is to destroy their treasure and suicide them on a bridge. However: many flaws with what your implying
A) Hitting someone with diamond armour deals NO damage if using a fist. If they’re against a wall this won’t work.
B) people with diamond armour have weapons. Be it a stone sword or iron, or even diamond, they likely have weapons. For example, if you both have iron swords, you have no armour and they have diamond. The person in diamond will need to hit you like 2 or 3 times and you’re dead. You will have to hit them like 20/30 times to kill the diamond armour guy. Even if you’re a pvp legend, trying to attack them 20/30 times without getting hit TWICE is virtually impossible… unless they’re afk… which they never are.
C) What if you don’t have a treasure? You can’t suicide them then. Suiciding them (Jumping off a bridge and hitting them off on your way down) usually means you die first, and in a one v one situation (even if both of you have no treasure) you’ll most likely die first, taking a final death and losing the game… pointless eh? So that method only works if you have a treasure and they don’t… Well that’s only when it’s effective.

So: on the surface yes, but in reality and gameplay no.

Treasure wars: The purpose is to destroy treasures and be the last man standing without taking a final death. It’s not:
Treasure wars: the purpose is to be so op you can have a 95% chance of winning in MOST situations. (Hence most, not all time)
Even only having half diamond will be a start. And I’m not saying remove it, I’m saying nerf it. Hense the title of this thread. Remove it is only on there as a suggestion, not what the threads about

Yes and I’m saying that a lot of treasure war players will highly disagree. Just be happy enchants aren’t added.

If a diamond armor man is actually decent then you’re dead and theres no way around it, getting 20 emeralds is gonna take a long time later on