Everybody knows it. You want to play Just Build, grind levels or do this fun “BUILD: Finish Top 3” quest. The “Meh voters” make it very hard for you because you hardly get any experience and have a very low score which is why you don’t win in the end c:

☆ How would it work?

The way the Build vs Build vote method works is actually quite simple. After the time for building has expired, 2 builds are shown side by side and you can vote for one of the two builds with the help of items in the hot bar (or use the report tool to report inappropriate, off-topic or racism builds)
This then evolves like a tournament. The round losers are out and the winners compete against other winners! In the third (and final) round 3 builds are shown next to each other so that the 2nd and 3rd place can be chosen better and it would not have worked otherwise. The image below shows this process again. You would not be able to vote for your own build (For example, if you are in team 6, you are not allowed to vote if team 6 and 7 compete against each other.) 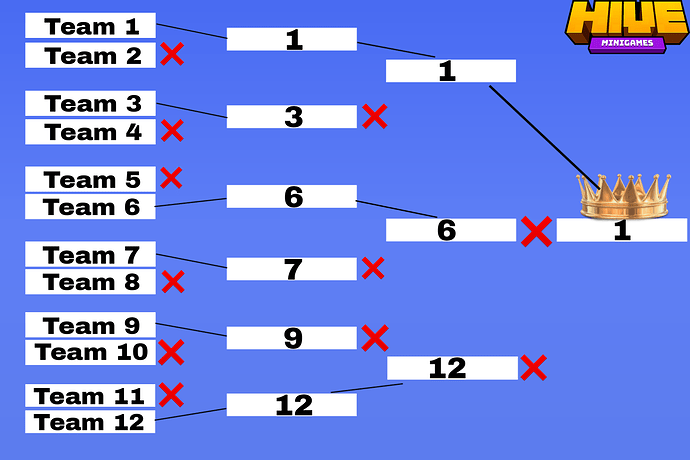 ☆ How would the teams that compete against each other be selected?

There are always 2 builds competing against each other that have roughly the same amount of blocks placed.

In the end it will be decided which build was the best (although of course builds with many blocks and details have an advantage, but that’s kinda the game, isn’t it? c:)

☆ What will happen if players don’t vote for a build?

Another problem that many are familiar with. Many players purposely don’t vote for builds or sometimes forget to do so.
If players do not vote in the “Build vs Build” method, both builds shown will get a point to avoid unfairness. In addition, the player who does not vote only harms theirself because other builds get more votes than his own c:

☆ What would happen if both builds shown got the same number of votes (points) in a voting phase? (for example 5:5)

If both builds get the same number of votes, the build with the fewer blocks placed will win. This is my and @GyrrabirdGamer s decision. This is subject to change. Another possibility would be to give the player who placed more blocks the round win because they put more effort into it.

☆ How would you gain XP?

☆ The pros and cons

Thanks for reading! I look forward to your feedback and additions!

19 Likes
Please fix this game
Knock out voting
Suggestion for suggestions with over 50 votes
I don't think i get any appreciation from my builds
Dyplexia May 4, 2021, 12:53pm #3

This is definitely much better than suggestions to punish meh voters, while still solving it. I don’t play jb, but this seems like this would solve some of its issues

As a contributor to this amazing suggestion, I absolutely love it. The concept of just build is a fun one, and I think this new system would definitely solve one of the game’s biggest problems.

I usually don’t like big suggestions like these because they take a lot of effort to put in. The thing is, this suggestion would actually make justbuild a good game. You got my vote in

there is one con that you didn’t add in though, it would make the game longer. I still think this is better than the current state of justbuild.

i wasn’t sure honestly looking at the title, but after reading the post i really love this idea!

l hope this will be in The Hive

I really hope they will add this soon. This is a great idea, and would definitely help a lot for Meh Voter. But one question, how would you decide you is second and third place?

Sounds like a similar voting system that hypixel has for pixel painters. This would help a lot.

You could also pit a cap on the “meh’s” e.g you can only vote meh 3-5 times in just build

This system is much better than doing that though, as this doesn’t limit you from choosing bad builds to lose, while still solving the problem.

That’s one of my problems with this. In the diagram shown in the post, you go from having 12 rounds of voting (one for each build) to 16. In addition, I don’t think this new system would actually “solve” the unfairness of Build Battle. It just makes it unfair in a different way. Correct me if I misunderstood something, but let’s say you make an almost perfect build, and get pitted against a slightly better build round one. You get wiped out immediately despite the fact that, had you played anyone else, you would have won. Therefore, instead of getting a close second, you come dead last.

But the point of this is exactly what you said. It’s like a Build Battle 1v1 and even if your build would be awesome if you won, the one who build better than you in the start will go to the next round.

Before I go any further, I think this is an amazing idea, and would be much better than the one we have now, however, I do have some problems with it, specifically how much you focus on “amount of blocks placed”. A lot of the time less is more, and minimalist designs can look even better than giant, grand builds, and vice-versa, I don’t think blocks placed should be an indicator of quality.

But other than that, this seems sick and I really hope it gets put in the game, easily got my vote

The way we used blocks placed to choose who went against who was so that competiting builds were of similar calibre. The way we used it to choose between ties is subject to change. On the one hand, the person who placed less blocks managed to make a very good build with less blocks, whereas the one who placed more put more effort into it.

My only issue is the tiebreaking system. I think the latter approach definitely couldn’t work, it’s just “whoever can click faster wins”. The former could work, but I think you should focus on preventing ties rather than breaking them.

Like maybe instead of just being able to vote “(A) is better than (B)”, you could have a few options, like “(A) is a slightly better than (B), (A) is moderately better than (B) and (A) is much better than (B)”. I just though of this idea on the spot, it probably has a lot of flaws and you guys could probably come up with something better, but I still think that making it so ties rarely happen is the way to go

EDIT: I feel like I did a poor job of explaining why I despise the concept of blocks placed dictating who wins and loses, and why I think ties should be random, but occur very rarely.

Hypothetically if ties happened in 1/100 battles and it was random, people would very rarely lose to RNG, and if it did happen, then the loser would shake their fist, go “darn” and then forget about it and go back to the game, where a tie probably wouldn’t happen again for a long time. If it was based on amount of blocks placed, people would still feel compelled to build a certain way, even if there was only a 1/100 chance it wouldn’t matter, it’s just how the human brain works.

I hope this made sense and got my point across

Oh yeah, my bad. The way the diagram was drawn confused me. That said, my previous point still stands. Pitting what should be the two “best” builds against each other in the first round means that the loser of round one doesn’t get as far as they should have based on the quality of their build. Does that make sense?

That’s how it sometimes works in bracket tournaments. The two best players get pitted against each other and only one comes out on top; it’s luck of the draw. That said, I’ll discuss with Luca other possible ways of matching builds up, any ideas would be welcome :)