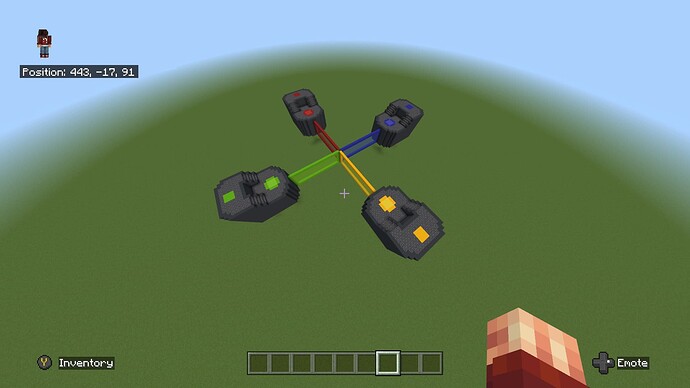 Who wins the game?

Which ever team gets to 3 first, same as regular bridge but more teams competing to win.

However, one thing i like about bridge is that if my opponent is almost scoring at my base, if i score they go back to their base. Maybe add a feature like this. Plus 11-15 other players(not including you) A: would take forever to start B: it goes from 2 MAX trying to knock u off, up to 9-12.
Its a good idea, but needs some issues accounted for.

I would enjoy a mega(2 teams, 5-10 each team) or like TW, 2 minions that have to be scored in 1 each before u can score the big one 3x to win. I think this might be a better concept and less chaotic

i feel like there would be very little pvp time bc there are more portals ppl can go through to score, so there would always be ppl scoring and i feel like that would ruin this. other than that this is a great idea

The only portal you can score in is the one across from you, so like red can only score in yellow and if you go into a different one you aren’t supposed to then it will respawn you back at your base.

Also the map you made looks great

I don’t like the idea. Seems too complicated for others to play it.

oh ok i get it now

I like the idea! I think this map though might work better for just teams of one or two?

Doesn’t this exist on hypixel as well, or is that like bedwars practice club or smth, either way I have definitely seen 4 way bridge before so it can work. Oops accidental bump

Me too, I want to grind every Hive game but just Bridge 1v1 or 2v2 is too sweaty

Obviously it’ll be sweaty with the 1v1s since its skill based matchmaking enabled.

Also not all 2v2 lobbies are sweaty and it can be nice to grind most times since you get XP a little faster.

Yes it would be beautifully chaotic. A good way to grind XP tho

Icy bridging on that map would be fun lol