Bedrock Hide and Seek is in need of more maps, as playing the same few maps gets stale pretty quickly. I’m aware of why the community-made Java maps couldn’t be added, but there are quite a few extremely good Team Nectar maps that didn’t make it over.

In terms of appearance and gameplay, these are three of the best looking maps (especially Sequoia:) ) and are still balanced and fun for hiders and seekers alike. I’m really curious why they didn’t make the cut-- old Java players would love to see them added, and I think they’d quickly become favorites in Bedrock as well!! 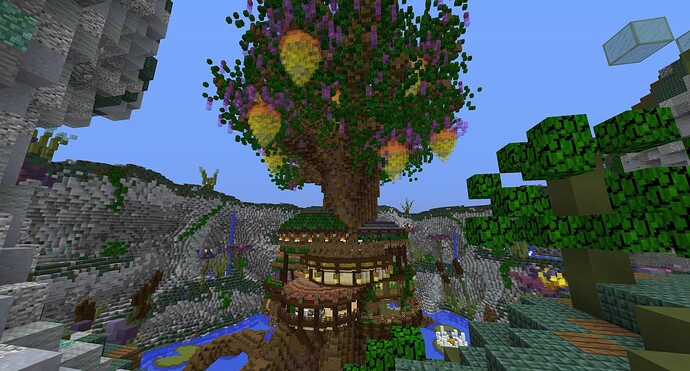 Pineapple Port (not the best picture) 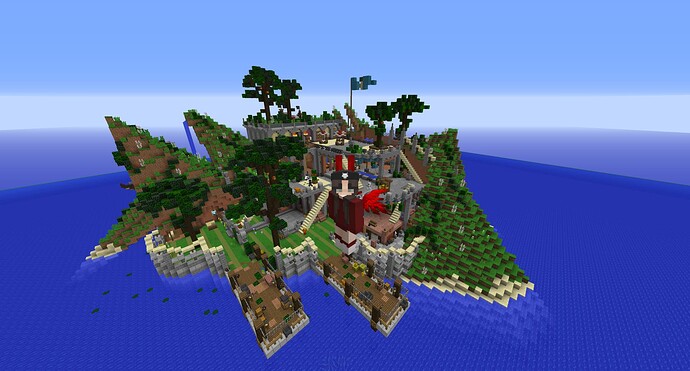 Hey moldbaby! I totally agree. Those maps look really cool, and I’m sure the game can get pretty repetitive after a while of only playing a few maps. Welcome to the forums

Let me be clear, hide and seek does not need more maps, it has more than any other game if I’m not mistaken (like 16 or something). The reason it might feel stale is that people tend to favour the same maps, and if you’re in a game with the same people multiple times you’ll likely end up playing the same maps. Right now, I find that hide and seek is one of the games with the most varied map selections so I see no need for this

More maps is ALWAYS a good thing unless the map is super bad (never gets played) or super good (always gets played) or super polarizing (provides an unfair advantage to a certain team (for example, town square is annoying for seeker mains and so almost always gets picked by groups of runner mains who like to afk circle simulator for a game)). While I’ve never played any of the old java maps not in bedrock hive, I can say with a 95% certainty that they wouldn’t hurt anyone and would be nice for most people making it a net positive.

Saying that, I remember seeing something about how the old maps weren’t up to the new “standards” or the hive build team and therefore probably wouldn’t be added.

I hope that new maps get added to hide and seek, though I don’t particularly care if they came from java hive or not.

You have 40 wins, so you may not see a need for more maps because you don’t play often. Try to put yourself in the shoes of someone who actually plays the game

Also, speak for yourself-- I play every map regularly and am still getting tired of them!

edit: Also, even if people did play some maps more frequently because they didn’t like the other ones, telling them to play maps they don’t enjoy is not a solution. more maps doesn’t hurt anyone

Thankfully the maps I listed here are great AND balanced. I’ve found that they have some very good spots for hider mains, but seeker mains wouldn’t find them too challenging.

I’m curious if these maps weren’t considered to be up to the new standards, because they’re very similar to the maps that were implemented…I understand Hive not wanting some of the older maps that were definitely lower quality, but these ones are beautiful and amazing.

So you’re saying these maps are good for seeker mains…

unvoted…
unless they’re as good as pripyat and/or office for runner mains too?

(jk about the unvoted, but remember that a big part of the Hide and Seek community on bedrock is made up of runner mains, so when you choose new maps don’t think only about the seekers please)

Having more maps is generally a good thing, but most java maps are outdated and don’t meet the quality of other maps that are currently on bedrock (especially as all java maps don’t have newer blocks), which is probably not something The Hive wants to add in 2022

They’re good for seeker mains but also good for hiders… Pineapple Port is definitely the easiest to seek, but it’d also be good for runners (3 floors, very open, lots of ways to get between floors). I don’t know any Java seeker mains who voted for Cali-- it was definitely more popular with hiders. And Sequoia just has so many AMAZING spots for hider mains; I feel like hiders would win a lot, but it’s still seekable.

what about the people who have to implement them. that would take a bit

I feel like “newer blocks” isn’t the biggest deal tho, also ty for letting me know about how they weren’t bad for runners

Most Java maps were made before 2020, which definitely makes a difference as many blocks were added to Minecraft since then (1.16 Nether Update - 1.17&1.18 Caves and Cliffs - 1.19 The Wild update). Not to mention that Bedrock can have custom blocks (sonic event and sonic maps for example).

Hide and Seek is about exploring the map and you currently have so little blocks to choose from as a Hider (most often bookshelf and oak leaves). Having a greater variety across maps would make the game much more interesting.

These 3 maps also feature a total of 7 blocks that aren’t on any other maps. Personally it wouldn’t make a difference to me whether a unique block was added in a newer or older update as long as it did differ from the more common choices. So I do think that these maps would still make the game more interesting.

Personally, as someone who used to heavily play Java, I feel that the maps suggested would be a much welcome addition to the Bedrock version. As a former runner main myself, I can safely say that Pineapple Port and Sequoia were some of the most fun maps to run while the Java version was still active, so the appeal to both seeker and hider mains wouldn’t be an issue. I also agree with moldbaby when it comes to block variety, as these maps provide several new blocks for hiders to try out.

On the topic of blocks being “outdated”, I’m honestly more confused than anything. Would it be possible to explain why blocks would be preferred based on when they were added to the game? I understand the visual appeal of blocks being an issue, but I doubt that many people will complain about a block being added because of how long it’s been in the game.

Also, and I have simply been misinformed, but didn’t Pineapple Port used to be a Bedrock map? If so, at least bringing that one back would be more than welcome, and given that it’s already existed on Bedrock at some point, I’d assume it would be easy to bring back.

As a dr player it sucks to be deprived of maps, and hns is pretty nostalgic for me so I’ll vote for this

If they were added I would be fine, but clearly I wasn’t clear enough when I said they aren’t needed.
My point was that they could work on more maps for other games that are lacking in that regard, because again, hide and seek has a lot of maps as it is (though less than I thought originally bc they only have a map list for java maps). Aswell as rechenheft said they are somewhat outdated. If they don’t take too long to add then sure, but if time other games could be worked on is spent on this I wouldn’t be so sure.

Again to be clear, I would be fine if they are added, though they are not needed

Obviously all of the games could be improved, but since these maps already exist, they’d take a lot less time to work on and add than if builders had to start from scratch

And Hide and Seek does often seem to lack updates so i just thought it would be nice to add something simple. I see ur point tho !!

Even if the maps or blocks are outdated, hive can easily make edits to the map(s) (like they did with the map “Office”) and give them a new look by only changing some small blocks to look more visually appealing.

Also I might only be saying this because I play HNS the most out of other bedrock games, but I think it’s important for this gamemode to have a wider variety of maps than other games anyways, it’s more fun to seek/hide given there’s more spots to look for, while other games maps don’t really change gameplay that much like treasure wars or Skywars.

I agree with this entirely.

The whole point of hide and seek is to “hide” or “seek” (or run, yk, but this isn’t about that) and when a seeker has memorized the entirety of every map it tends to get repetitive. Giving us more maps would directly change gameplay while for other games its just a change of scenery. I believe that Treasure Wars and SkyWars both have a similar amount (if not more) maps than hide and seek, even though the games are pvp based and not map based at all, and recently treasure wars got another 2 maps. Meanwhile, hide and seek is extremely map-dependent, and we haven’t seen more maps in a while (other than the seasonal ones but those dont count lol).

Adding some of the java maps would be a relatively easy way to better the game and pacify the hide and seek community, and would be a big, much-desired change to the game. The game is getting tedious, and this would help spice things up.

The whole point of hide and seek is to “hide” or “seek” (or run, yk, but this isn’t about that) and when a seeker has memorized the entirety of every map it tends to get repetitive. Giving us more maps would directly change gameplay

No one here is saying that Hide and Seek doesn’t need more maps, but new maps simply have a higher level of quality compared to older maps. Java Hide and Seek used to have more than 20 players (Bedrock has 16 players per game). Hiders already win a majority of the games and some of the mentioned maps (especially Hotel California) are too large for 15 seekers (if seekers even find that many hiders).

Meanwhile, hide and seek is extremely map-dependent, and we haven’t seen more maps in a while (other than the seasonal ones but those dont count lol).

Most game modes are map dependent as each map offers special and unique strategies. Some maps are better for siderushing, while other maps are better for going mid first (SkyWars and TreasureWars), same applies to Murder Mystery where the murderer has different mechanics and tools to use, e.g. invisibility, speed, teleporter, spacesuit to hide the skin etc. The map is often an important part of gameplay, which doesn’t just affect Hide and Seek. ^^