I have a new Hub game idea for arcade: SPEED RACING!
WHAT IS SPEED RACING?
Speed Racing would be a new racing arcade HUB GAME!
In this racing game you take a lap around the roads in the sky
It has 2 modes time trials and duel race 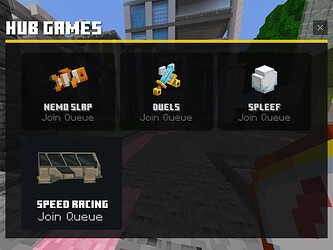 Time trials
In this solo gamemode your trying to get the best time record on the track
Duel race
In this duo gamemode your trying to beat your opponent by completing 3 laps first
When you join a speed racing queue you will wait 20 seconds for another player, if no one else joins you can do the solo time trail mode
If you fall off the road you will be respawned close to where you fell
BOOSTERS when racing boosters will randomly appear in different spots of the road at different times, I decide to not add powerups to this as it is meant to be a simple hub game
CHOOSE A CAR!
To make the game more fun you can choose a car to drive
Each car has different speed, and turn mechanics,nwhile racing you will be inside the car but the car won block your driving
use a mount 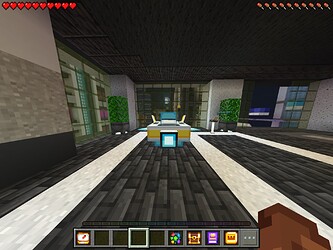 also now that mounts are added you can use a mount to race with
When using a mount to race it will not leave the ground and it will not give any major special advantage, the different mounts will have few differences. All mounts will downsize to so similar size that is easier to see out of
The bee mount would be a little faster but harder to turn and the cruiser would be slower but easier to steer and the spaceship would have medium speed and medium steering 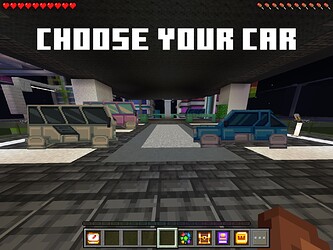 -This topic was brought to you by a hive hub rat

This could be made cool as long as its not a copy of galaxites speed racing mode.

[Server name withheld to prevent advertising]'s Hyper Racers is probably a good example of what this might look like. Also, only people who own the mount should be able to use it as it keeps the value of the mount.

Another Idea, items. Unlike Mariokart they aren’t random and are more of a charge when it reaches max you could use your power up like a boost or a boombox

. The lower you are in the race the faster it charges.

BUMP :> for more peoples to see

The mounts thing is bad, bumblebee would be the ‘meta’.
This would be fine if the cars also had perk.
Although this would add to the fact that the spaceship mount is practically useless.

I find it pointless to have just one lap, make it at least two or three.
More laps = more time racing = more chance for comebacks = more exciting.

Other than that, this would be nice since hyper racers is Awful on lower end devices. (Like every other gamemode on space server)

As jpdagamer said, I think the cars should be smaller because in big ones like that, (a) you wouldn’t be able to tell which are just normal cars unless you cleared the other ones during the games and more importantly (b) you won’t be able to see around in f5 in bigger cars which also feel clunky to drive alot of the time

How do you edit a photo into a photo

ANOTHER BUMP I like bumping my posts every 20 days lol

this is a cool concept voted

Bump I saw a dupe

This looks awsome! i would play this CONSTENTLY if it was added. you got my vote!