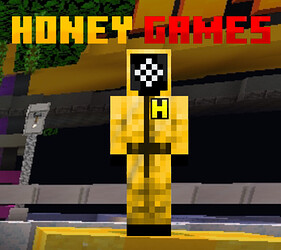 What Is Honey Games?
Honey games is a group of multiple elimination games where the last person left wins, Think something like squid game.

How It Works
A group of 30 players will play 6 games, I will explain each one below

Please give your feedback and ideas on this game, I am designing multiple games that I want added to hive!

I’m going to work on creating some concepts for hubtitles, avatars, costume, and the game, because this idea is going in my youtube video
But if any good artists are interested in something like this they would get credit in the yt video for art

So its the sonic event game that was added for the sonic event but people who lose get kicked out of the game? Also some of these games are just gamemodes from other servers like Galaxite’s rush, Mineplex’s speed build, and Cubecraft’s minerware which includes tnt tag, hot potato, and dodgeballs but the dodgeballs are snowballs. (All mentions of servers are NOT attempts at ADVERTISING) Also, red light green light is from the sonic game. Maybe some more unique games would be better?

My Idea of making this game was to be a party games type game
Also I think that the hive would be fine adding some of these games
Just as long as they has some uniqueness
Speed build: while it is kinda similar instead it’s just copy the build and finished, maybe custom blocks?
Red Light green light: tbh I forgot that was in sonic games but in this version I would think it was be a more simple faster straight race
Maybe with some obstacles.
Hot potato idk just in a special hive arena,

So I think hive would want to have some basic recognizable games with the more unique ones to attract players
Kinda like hive bridge, it’s a popular game but hive made it basic only with a few additions such as kits and the detail
Thanks for feedback

Galaxite also has dodgeball with snowballs if I’m not mistaken.

I think you should use the sonic rlgl because it seems more fun then just a straight line.

Not really, minerware is randomised microgames whereas this is a predetermined order, but yeah definitely can see the similarities

This is different from mine ware the games are each detailed and around 1 minute, and they are in an order. Also the point is for this to be an elimination game more than a party games

Some of these games alone would actually make some good hub games such as hot potato, dodge ball, or death tag

Huh, what’s death tag? Minerware on CubeCraft has a combination of death tag and hot potato called TnT tag. So I think you should get rid one of them.

Oh, then what’s the point of turning it into a full game when it’s already playable

Hm, what would be the player limit?