What is hive assassins well hive assassins can be this game where you can kill your targets witch will show on a map and kill your assassins witch you won’t know who your assassin is but you also need to avoid your assassins or your will get killed and if you get the wrong player who isn’t your target or assassin you will get a 5 second cooldown before you start attacking with your sword again and once there are 2 people left it will be a final death match for who would win. Now you might say this doesn’t sound original but the hive can add their own twist like by getting some but very few random chest around the map that give you useful items like more damage ect and the most important think will it be a 1 tap kill type of game or will it use hive kb. Well the hive developers can decided on that because either option is cool and I know this sounds unoriginal but the hive can add their own trust and it would really make the game feel fresh and new so what I am going to say ass well is.

This thread is rusty but I tried ok I hope you agree with me.

this has been suggested multiple, multiple times before

not that it’s a bad suggestion, but please use the search bar next time to make sure it’s not a duplicate

I did and it only showed up with one suggestion about it.

First of all, it’s been suggested 3 times 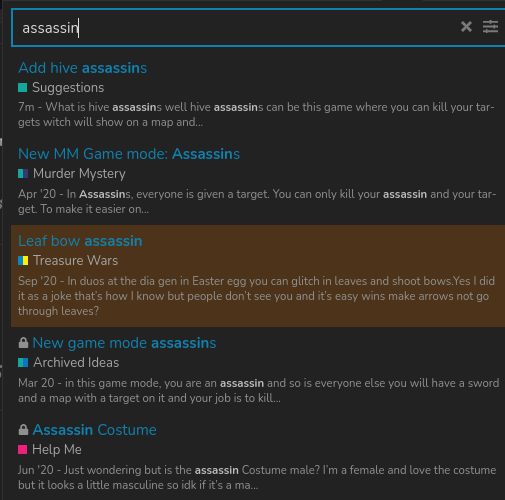 Second of all, that STILL means it’s a duplicate even if you found one suggestion about it

Keeping this thread open and not marking it as duplicate as it’s a little bit different with more info in it and all other suggestions are pretty old.

I feel like this is very similar to SG

Wait so your saying my thread doesn’t need to be closed.

Well no that was just an example I was saying that the hive should give it’s own twist.

Hive skywars is the same thing like alot of thins are going on in the centre of the map.

Can you just admit that you don’t like my idea

I’ve played a murder mystery assassins mode before on hypixel, I wouldn’t say it was very chaotic but I can see how it could be. It wasn’t my favorite game mode though so I can’t say for certain that my memory of it is very accurate lol.

Don’t spam me the same thing

Wdym mini game isn’t that what I am going for.

The hive is called hive minigames