What the Title Said

The main reason is a thread I made, discussing why Mobile players could be back together with Console Players.

Link: Are Mobile Players Really in a Disadvantage With Controller Players

The main point being that many people in the thread have mixed opinions on this, so my Simple solution is just to allow mobile players to join in PC/Console’s queues as a option.

And no, the command wouldn’t work with PC and Console to allow them to join in Mobile’s queues.

why are people so annoyed by the pc/controller/mobile thing? i get it, it’s unfair. go do java or something.
pbmm is already a thing

how do you play java on mobile

i thought java was pc only lol

Sir, this is a Mobile Bedrock Suggestion

that adds nothing to what he said, and he has a point. if you are somewhat annoyed by the fact YOU mentioned, just get java on your phone

or rather, just be patient until Hive finds a way to fix this issue. there’s already like 30 threads on this subject.

Find me one of those suggestion

I was not just talking about suggestions when I said “threads”. 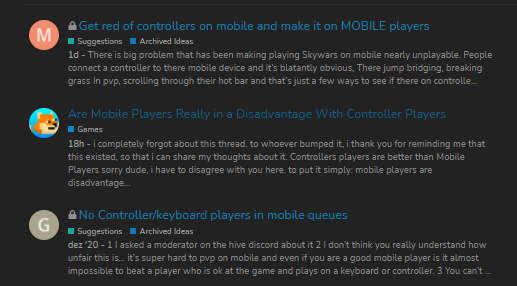 this topic confused me

True, but it also better than downloading Java edition, on a phone

Try to get in a party with someone on pc. All your games will be queued with other pc players, doing what you essentially want.

The other, weirder, way would be to get a pc, install minecraft on it, get in a party with your own pc. Weirder, but efficient if you’re rich af and have no friends

its something that they said will happen in the future

Pretty much what I’m saying, but without having to be in a party with a PC or Console Player

I don’t see any reason not to add this, you’ve got my vote