ok so maybe have hub title unlocks and maybe a costume for achieving milestone win streaks like 5, 10, 25, 50 and so on, because for starters it would be another way to show off and that would be cool but also it would give the win streak count some actual in-game use since the actual counter is hidden to other people.
i know hardly anyone will get to like a 50 win streak but that would just make it all the better to show off with teehee

i doubt this will be added, as it kinda counts as making winstreaks public. 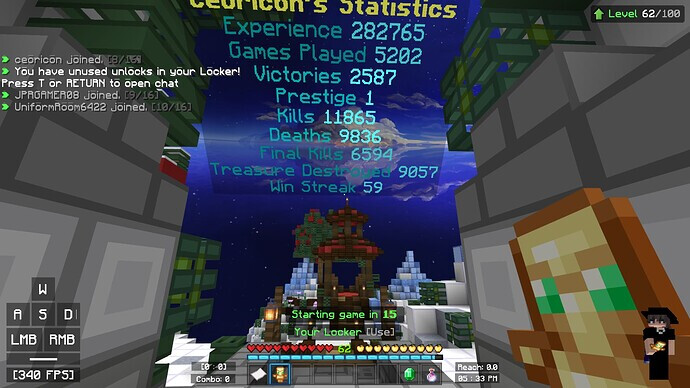 ik quite a few people who have gotten 150+ winstreaks

that would be cool. one problem might be hackers or snipers seeing a hubtitle that is for a winstreak and try to get into a game with them. That might not be an issue but it potentially could be.

yes, but not that many compared to EVERYONE that plays hive, only the best players can keep a win streak going and that’s what would make the unlocks so good.
and if a 50 wins streak is too low then just ask for one at 100, 200

Originally, I heard that the Hive was hesitant to add win streaks because of two reasons. One, it could potentially create a more toxic play environment, and two, it puts pressure on the Hive staff because if something happened in the middle of the game (such as the game crashing), then it could cause a win streak to be ruined unfairly.

Therefore, I do not think this is a very good idea, sorry for my disagreeing but honest opinion.

and furthermore, it does count as making winstreaks public, but it makes them public optionaly, you don’t have to put the 100 winstreak title on if you don’t want to; if making winstreaks public in itself was bad then you posting yours here was bad, but it wasn’t because you chose to do it yourself, that is different from showing winstreaks on players in lobby’s without them being able too take it off. the hub title would give people agency into weather or not to “show off” and i agree that having winstreaks forced to be public is bad but this is totally optional.

fair enough, the hive can already be a bit toxic at times however personal i dont think that this would change how toxic the environment is that much because people are already going for winstreaks now, and people have high winstreaks now i just think that they should get something for that because winstreaks are more prestigious than other stats like kills or wins in general, and furthermore similarly to the login streak, it can end and reset but the login streak has things that you can unlock to show for it and to keep your mark even if your stats go away.
tldr: because the stat isn’t permanent like wins in general you should be able to get something to record the mark you get for if you loose it (ik the hive could just add a separate highest winstreak counter on the stats but actual unlocks would look cooler and keep people playing)

as for the staff being pressured, i honestly dont know, i dont know that side of it sorry

The two examples I used in my previous post were both used in a different post I found on this forums many months ago.

adding quests like "Get a winstreak of 5 in Treasure Wars" for 20 (perhaps 30, since not everyone can do that easily) qp would be better

for 20, 30 even, bruh thats in the same category as win 3 games. but something like this would be good when(if) they do their quest master update maybe as a big weakly quest or something; but yes - i just want to see something done with the winstreaks to be honest, i know the hive doesn’t want to “show” them but surely they can get around that somehow