Although custom individual UI’s are very effective and elegant, they take time to implement. The solution is simple:

Modify the server_form.json UI file and other generic files used in vanilla UI’s to incorporate the Hive’s design language. This will give every UI on the server the same look and feel and removes the old, basic UI entirely from the hive.

By changing the server_form.json file, the Hive can roll out its custom UI everywhere at once. This is because many featured servers (such as the Hive) use one file for all of their vanilla UI’s. After just one refresh, the hive can achieve: 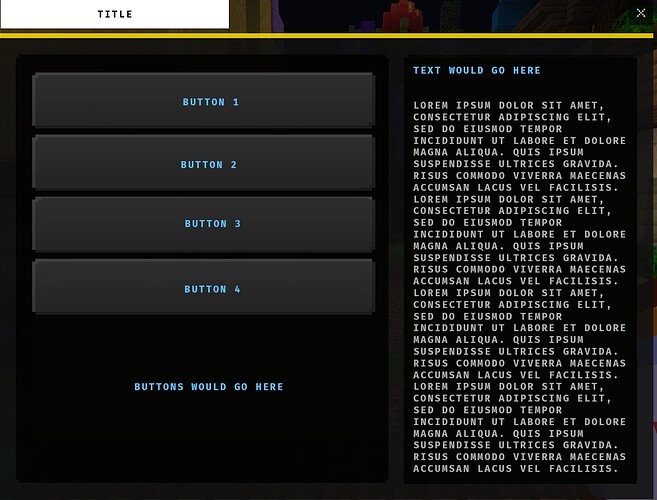 Example UI 11617×1229 135 KB
The UI above could be useful for menus with few buttons, such as the landing/starting pages of the Friends, Party, and Pet UI’s. This UI would be a great fit for nearly every in-game menu, as it maintains many aspects of the normal server_form.json 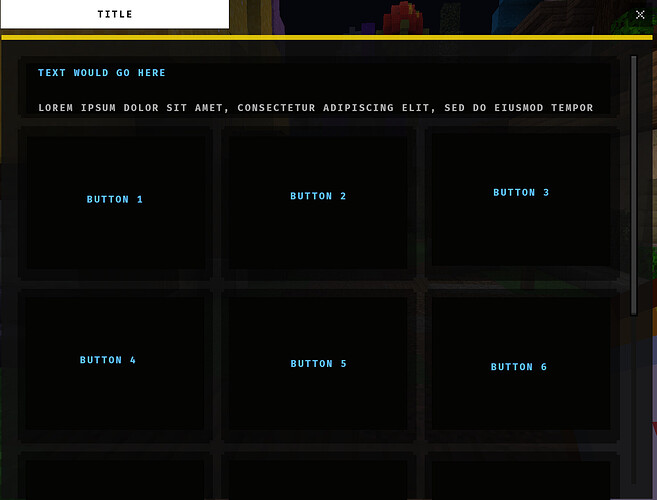 Example UI 21617×1229 156 KB
This UI could be useful for UI’s with images, such as the Locker’s pages where you select a cosmetic. This UI is a great option for many UI’s, as it has built-in images for each button.

Thank you for reading through my suggestion! Feel free to give me any ideas or other input!

i dont know if this is accurate but seems like a really cool idea if it would work. i dont know if the hive can use your code for it, but would definitely help them out if so

I haven’t put together any code yet, I just made some images in photoshop, but thank you!

Oh I thought I saw some GitHub link lol. I must be seeing things