Currently, the rules prohibiting skybasing and holding up the game for no reason only apply to Treasure Wars on the official rules article. I feel like these should officially apply to SkyWars as well, as these can both happen in SkyWars. 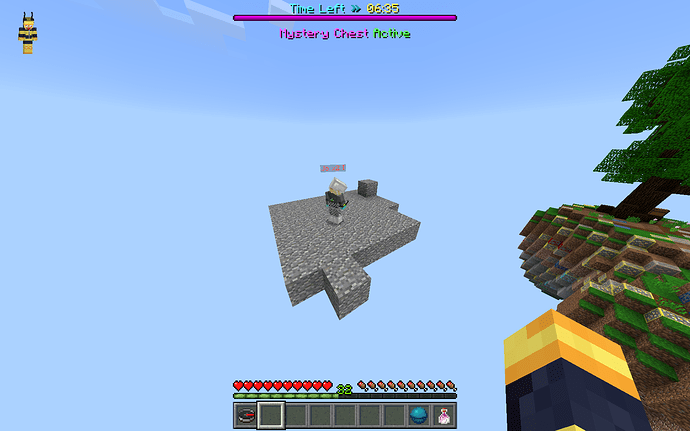 I think it someone kinda is, but it should be clarified, like here is splodger in my skywars stereotypes thread that got locked sadly

Since it’s not really a problem currently I don’t have any thought but just in case. Would SkyWars be bad if there were no rules?

The rule may apply to SkyWars as well, but in the official network rules it says that the rule applies specifically to Treasure Wars, so I wasn’t really sure if it applied to SkyWars or not. It would just be nice to have some clarification.

This happened when I was playing with @httpcookie, @thegamingtoyyt, and one of cookie’s friends. Cookie killed him by clutching a knockback boom box TNT jump over to his base.

I just checked – the rules concerning skybasing and stalling the game do indeed apply to SkyWars as well. It is not in the rules just yet, but they will fix that soon.

Would this player still get banned?
If so then this player’s experience is literally just

reads the rules about skywars and see no rule about skybasing

gets banned for skybasing

No, I don’t think it would be fair to ban this player for that reason. But going forward, once the rules have updated, I will report players that skybase and/or stall the game for no reason.

The rules have been updated. 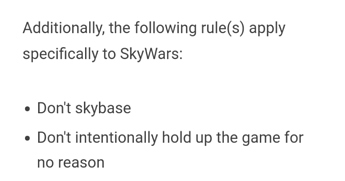 @Hlzyzptlk you can lock this now