SMP(survival i tried really hard to think of this)

My idea is you can punch or press the SMP button or npc and a menu comes up and it has public servers list, invites and create SMP

I think this can be a good idea for any building, pvp or speedruning cults to make communitys on the hive giving more reason to join. It can also be good for many players to make new friends

Gamemodes=
On your SMP only you can use the /gm command. /gm creative will set everyones game mode to creative
/gm survival sets everyone’s game mode to survival

Hive is a minigame server, unfortunately, so something like this would not be implemented. Lifeboat does have survival mode if you want to play on that though.

You see i thought ahead of that when making the SMP you can edit the amount of players that can join but on lifeboat there’s no limit so on the SMPs you have less chances of being killed and griefed than you do on lifeboat, on lifeboat survival any random person could find you and spam kill you any second

Survival smp on the hive won’t fit in

Just like the others said, SMPs in a minigame server would not fit, you can also just invite ppl in your world of they have an account in Microsoft 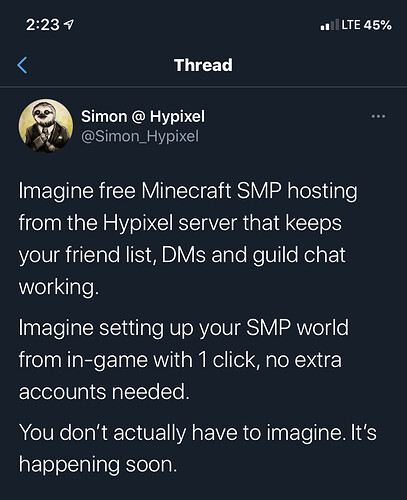 ooooo this sounds fun! Maybe they could link it to swarms (swarms smp) like you make a smp with your swarms members