I looked in the shop recently and saw this abomination: 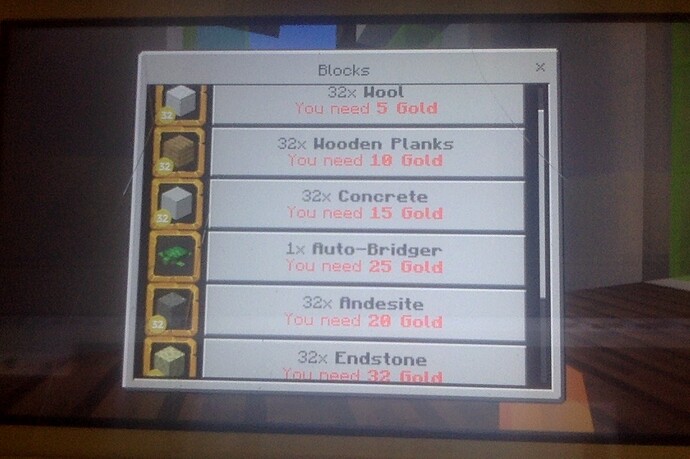 Look closely. Look very closely. All the textures shown on the items are from before the Texture Update! Disgusting. Gross. My eyes. Oh man.

I understand that Treasure Wars was an OG game on Hive Bedrock. Hive Bedrock was added in 1.13 while these disgusting textures ruled the game. But the Texture Update came almost two years ago. It’s about time to update these textures. And if you scroll down to the glass, that shows the current texture. Not that they updated it, glass was added in July.

My wish is for the Hive Team to take the time to remake the pictures next to the shop items so they display the current textures.

Also I was thinking about this suggestion the other day, yeah it would make sense. Btw should probably change the title to something like “update shop textures” so people can know what this is about

I never noticed that.

I doubt that would be possible unfortunately.

Yeah it probably wouldn’t be, since those are uploaded images, not some sort of resource pack.

Yeah, that’s why leaf block is always a terrible choice

Why? That makes 0 sense because when you hide a real block is placed where you are with whatever texture you have. And it’s easy to notice anyone who isn’t hidden anywhere.

You aren’t supposed to bump reallyyyy, old topics i believe

That’s why I said I know what I did lol

According to this part of the rules, a bump should be fine here, as this hasn’t been added yet. Bumping an old post is (I think) better than posting a duplicate if you want more attention to be drawn to the issue.