I suggest that hive either build or turn one of these existing parks into a pet park
(also if one of these was changed into a pet park a mailbot would have to be moved)
HOW IT WORKS
The way the pet park would work is anyone who has a pet is able to enter
Im unsure if pet rock owners should be allowed in. over 300,000 players own them, so I’ll let others decide

WHATS INSIDE?
Inside the pet park there is both simple and cosmetic stuff for your pets
Such as food (hive could add eating and drinking animation) water, beds that you can put your pet to stay in, toys that they will retrieve for you, and MORE!
LEAVING YOUR PETS
when your at the pet park you can choose to leave the pet there by placing it in a bed, idk why anyone would wanna do this but I think it would be a cute feature,
Cubee pet bed 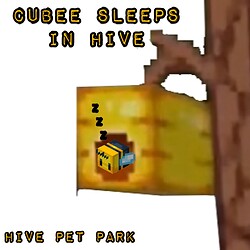 WHY DO THIS?
Currently a lot of people find the price of pets to be unreasonable
Adding a pet park could give more value in the pets, because it gives a better reason to buy them
Please give feedback and ideas on this

Brought to you by- a hive hub rat

The idea seems relatively solid but idk why I’d leave my pet to sleep somewhere when I can click on them and put it away.

That would cause many problems if you’re talking about the rock pet.

I really like this idea, it would be really fun!

That’s why I put a vote on the rock pet

I like the idea, more features in the hub is always a cool thing imo

Bump for more peoples to see

I agree that there should be more use for the pets as they’re mainly for following you to hub.