Here I am, existing on this site again.

I was thinking about this for a little bit, but I think it would be pretty cool if Hide and Seek gets an update where it would get more levels like DeathRun did recently, and get block cosmetics based on costumes for unlocks.

Like, what if there was a Ghosty hat and bow for the hat and eyes respectively, or wings similar to the SkyWars max level costumes? Maybe even Pizza feet, referencing the “Pizza Time” costume?

I’m kind of imagining something like that for Hide and Seek, since it would hopefully give me a reason to keep playing it (I’m getting bored of it and I don’t want to be bored of it) and also, y’know, the last update for the game-mode was around a year and a half ago.

I know your a big hide and seek fan
I think that new unlocks like this (or other NEW unlocks and levels)
Would be worth adding, hide and seek is already a really easy game to level up in it just needs an update like deathrun got, or even better an update with cosmetics AND new features

Hopefully they add this 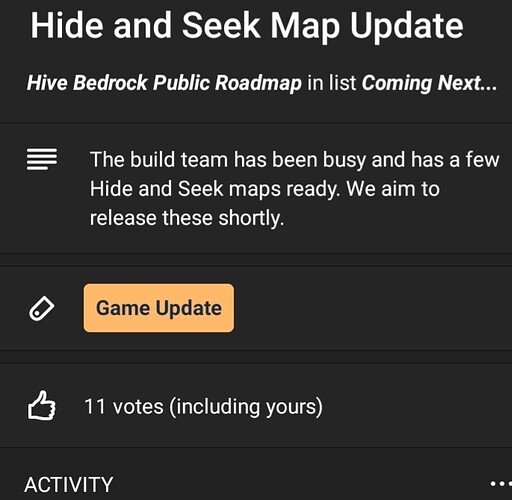 they pretty much confirmed its only new maps tho

(edit: I was right! the 2 new maps are AMAZING tho (except chime, that ones ok))