Minigame Stats in the Hub

So currently if you want to see your current minigame stats (e.g. total games played, games won, xp etc.) you have to go into a minigame lobby to view them. At this stage you usually have around 15 seconds to view them before the game actually starts (unless you happen to join an empty lobby where you then have a few extra seconds). If I just want to view the stats for that game but not play it, I then have to leave within that short timeframe.

So my idea would be somewhere in the hub to have all of the minigame stat “holograms” so you can view them without going into a minigame lobby.

Yeah, maybe they can put that behind the throne or something

yes this is amazing just what i need!

I think there should just be a simple command implemented such as /stats (game).

This would let people have an unlimited amount of time to check them and also allow them to be able to how they’re doing anytime. :ᴰ

A stats command could work, but I was thinking more of a place to go to in the main hub to view them, as it can be hard typing commands when on mobile, especially having to remember the exact wording for the minigames you want to view the stats of.

Maybe have hive+ users to check other people stats

Why just them though? It doesn’t seem very fair if you ask me.

You can check anyone’s stats though 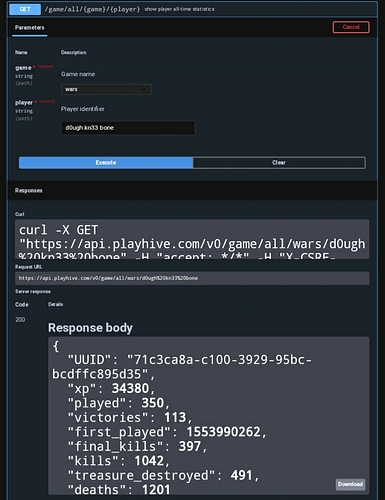 What if there was a NPC that when you click on it, you can select a game, and then it will show you your stats for that game? I think that would be a good idea.