Make it so you can report in game

So… imagine this: ‘you see a hacker. Skywars, treasure wars, etc, and he starts going crazy and killing everyone. You try to report him but you can’t’. I don’t know if it’s just me, but it’s kinda hard to report on the hive. I mean, I’ve encountered about 3 hackers in my time of playing the hive (maybe 1 year) and I’ve tried to report them, but no luck, and they’re probably still hacking. You should make it so you can report in game. Type in /report (name) and (reason) and then boom he’s banned. (Leave suggestions if u have any) 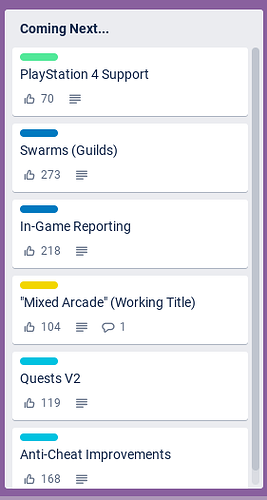 Reports go on the Discord for now :)

People might abuse the /report command, and Hive are just gonna a bunch of spams. But great idea.

As Centuria stated, this is coming soon

Next doesn’t necessarily mean “soon”, and we all know that 'cause of [cough] Swarms… [cough]

No they aren’t. Swarms are guilds. Custom servers are part of it.

Oh. Ok. Ty for telling me

next time you can check -----> https://trello.com/b/QfmAXk78/hive-bedrock-public-roadmap