. I have been thinking since @anon94654444 told me to only ping specific moderators when wanting a post closed, what if there was a lock post button?

This will be like the report button so if you false lock on purpose and you do it multiple times, well, the moderators can do pick the punishment.

i dont think this is an actual discourse feature, which means it cant be added.

Oh yeah, this is for the forums lol.

He means discourse. Honestly, I don’t really see the need for this though

He meant to say Discourse, which is the actual software used to create the forum.
I dont think they could add this even if they wanted to.

what do you mean i meant? i said discourse

I DID IT AGAIN DAMNIT

Never mind, just got a PM from @JustTakesEffort.

Please no, there are already too many locked threads imo.

Also scratch, just watch what you say, most for the threads you have gotten locked, you said something and didn’t want people in the future to see it. Just say something that you will be fine with in the future, no matter how others interpret it. For example poor discourse/Hive, whoever stores the data, has to store these two threads that have no context and have no meaning to anybody except a handful of people, but not because you locked it, because you edited it.

And this one could save a few people hours of time and effort. 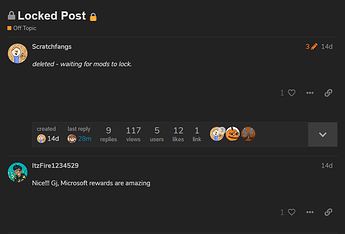 image792×539 36.1 KB
From what I could tell, you grinded Microsoft rewards to get something, and then realized that you can’t use them on the IOS app store thing (Proud android user speaking, I don’t know the name for the app/game store on IOS). By doing that edit, you prevented others from reading it and potentially caused a fellow forumer to waste a few hours of their life. By getting it locked, you prevented yourself from being told if someone found a way to do it on IOS.

Please do not remove the context of a post after it is made, and please do not lock a post because you don’t like the way people reacted to something you said, unless it is causing arguments.

Oh, I am sorry, thanks for telling me!

As stated above, if you think a post should be locked or if you want your own post to be locked then you should just flag it. A “Lock Post” button is not needed