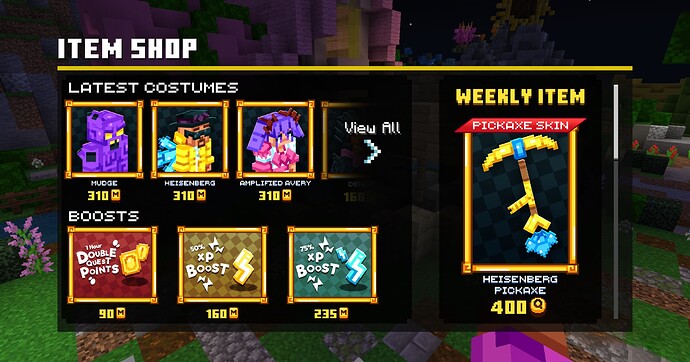 Et viola! All of your costumes in one place! Super user friendly (and in my opinion, will get WAYYY more sales

Clicking the little box icons for the costumes will instantly take you to the store page!
I also intend for users to buy other items, like boosts, as seen below. Maybe, users can also buy other things, like Pets and Mounts! Maybe a little advertisement of the Hive’s official skin packs somewhere, just for good measure!

Please vote and like if you think this is a cool idea!

Oml that is absolutely AMAZING

vote for your own suggestion

This reminds me so much of Rocket League and I love it.

Will the pickaxe skin work in the hotbar too?

It is still functionally a stone pickaxe)

This is giving me sonic the hedgehog ring shop vibes
I just have to say… this is… AMAZING! **GREAT WORK **
keep it up Maj

I like the idea, though the quest island has a teleporter in its menu (and boosters are in the shop menu, accesible via the menu of minecraft when pressing escape) and even without it it’s not like the inhub questmaster teleporter is far away at all. And the costume display, if you mean the ones next to the stairs at spawn, is not even 2 seconds away from, well, spawn. The menu can still be implemented, I just think it’s exxagerative to say you have to walk ALL the way there, when the game NPC’s, especially the Arcade ones, are liteeally further away, and it’s still not even 5 seconds of walking.

I dont even know what rocket league is about

(Sorry it’s been 2 months)
Great idea, hope it gets added.

54 votes in 2 days? Good to see the forums are still active.

I love the idea of more kinds of boosters

I think you must at more

Have you read the suggestion? He is also suggesting pickaxe skins and boosts.

Boosts already exist and what will the pickaxe skin be used for, its a skin…
Well i guess its cool and all

You could say the same for costumes, hub titles and avatars so that’s not a good argument.