Inform Staff About The Forums/How To Best Answer Questions

I often see Hive staff in the “help-me” channel on the Hive discord after someone suggests something immediately make a hive bot suggestion message appear regardless of whether the suggestion has already been made on the Hive forums or not which I personally believe is a big reason duplicate suggestions on the Hive Forums get made.

Furthermore, I always see Hive staff on the Hive Forums and discord whenever recommending or telling a player to do something not explaining how to do the thing they’re recommending the player should do which leaves players confused or in the dark and forces players to try and figure it out themselves or forces them to ask more questions.

For example, this moderator recommends the player should make a custom server without explaining how or anything about custom servers or what they are at all. 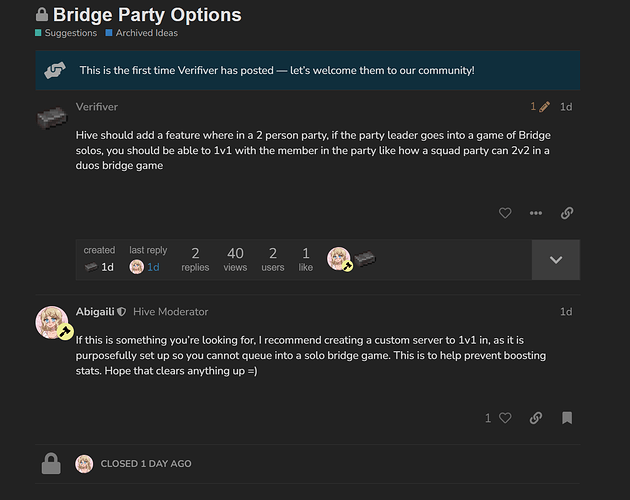 In my case, I answer questions with “I believe” as it overall sounds more kind and more professional in my personal opinion. In the case of the suggestion you screenshotted above, I answered the player as to why their suggestion would not be implemented. If they had any questions about custom servers, they have many resources availiable to them such as messaging a helper or even moderator as we would be more than happy to assist them with that, or visiting the support site. I can assure you that the staff team as a whole is well educated on the forums’ inner-workings and rules even if they don’t post as often as some.

Instead of making a suggestion, I recommend that you contact the staff managers directly [email protected] or [email protected] if this is something that you are concerned with, as the forums are not necessarily a place to call out players. Thank you for understanding