Immediate respawn for The Hive Arcade The Bridge

When you fall to the ground, you should immediately just die and not minus health slowly as that would take time and let the enemy to go ahead first

I mean, it is annoying, but that is the intended purpose. When you die, you shouldn’t just be able to go back without any consequences. Otherwise, during a fight, you could just void to reset and get back to full health. That’s why they have the slow death.

but… that’s the fun part

The whole point of bridge is you push back your opponent, or you somehow outsmart them, killing them then just being able to score is just boring.

you could just void to reset and get back to full health.

thats the point? yeah u might com back w full health, but u also reset ur position to the start again

That will make it basically impossible to score. Are you saying you want to have to kill someone three to four times before you are able to score? Do you think you’ll be able to surviv eall those attempts if your opponent keeps coming back with full health?

making u kill them 3-4 times prolly would make the game even more fun. The games ive been in only took abt 3-4 minutes each and i prolly only kill the once or twice each goal. Its not like they respawn instantly when they fall in the void too, the time it takes to fall from the bridge to the void + the time to fall from the tube to the arena is alr fair enough.

I agree that it should be instant death. In the games I lost, 90% is because I void and respawned too late so that I cant defend. 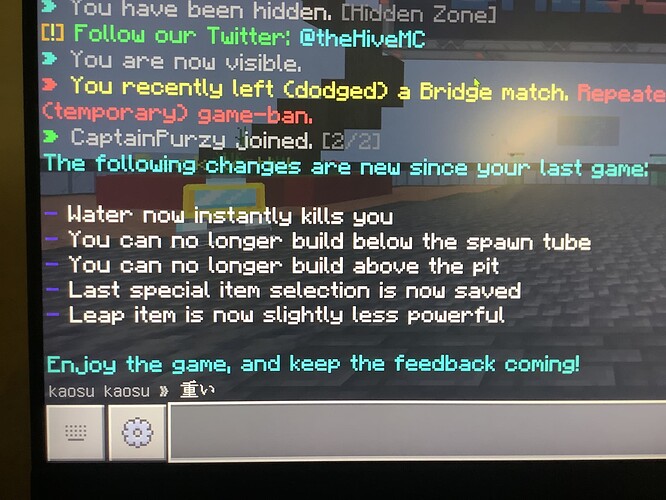 well i guess i was wrong, sorry guys

from hypixel they insta spawn u back and people dont have a problem with that on java so um what are u tryna aim for? i vote for this topic

as i said in my last post, i was wrong. however, your main reason shouldn’t be because hypixel has it.