Express yourself through Emojis!

I feel like players cannot exactly express themselves through just text, like saying “haha lol” is just not expressive enough! So I made some hive friendly emojis (some emojis were cut due to inappropriate meanings) that people can use anywhere. 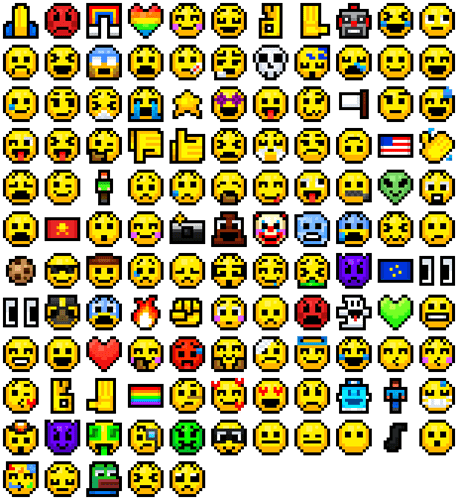 preview_spritesheet1232×1344 114 KB
How they could be used? It must be simple, because emojis should be typed fairly quick. I don’t want anyone getting snowballed in SkyWars just because of an emoji!

Ways I came up with:

aww, these are great! I especialy like the mailbot one

i was making the robot emoji and thought about mailbot. so there it is

can you share some of the pixel art skills

How would this work for console players in terms of how slow they can type(i mean I know it’s only a few characters but I feel like a menu would be quicker). I feel like if there was like a menu with all the emojis like where u could use your cursor to select one but how would u open that menu

Thats a great idea! A menu would certainly be better

Perhaps, but it could be useful in some areas

This is genuinely such a good idea and newer users should see this.

I randomly found this suggestion,
These emojis made by Ranmaji look so cute and amazing this would certainly be funny to use

bump, Emotes are out!

You probably already know, but there’s already emotes. If you mentioned that, I didn’t see it, but they don’t have all of these, also nice designing

<< lol these are the emotes

Ohhh, in chat? I think they could add the normal emotes into chat’d be cool B)

my guy i made this a year ago

Out of two flags why did you choose the United States and Vietnam? (I’m American btw)

Yeah I was gonna say that, I’m guessing it’s meant to be the China flag coz the EU flag is there already and it’s for the regions. Im not sure why he didn’t use the Japan flag since it’s easier to do pixel art and it’s what the server has for Asia region flag