Since I’m applying for Helper in December 2022, And Hoping to Be the 1st Hive staff with Autism, i would like an Autism awareness month event (maybe from March 26th- April 3rd 2023 since April 2nd is Autism awareness day)

This will mean a lot to me

Don’t forget to vote for your own post!
Pretty sure there has been a staff member with autism before, I could be wrong. Best of luck to hopefully becoming a helper!
Idk about a month, but for sure a cosmetic would be awesome!!

Idk about an entire hub
But a hubtitle , or even better a monthly costume themed around autism awareness would be cool

why is this so wholesome

Oh that would be such a nice thing to see. I hope Hive does something like that. They’re really good already at considering the audience of their players, like the Chinese/Lunar New Year theme in January, as an example.

I’m pretty sure they do that in February lol but yea they are good at considering certain cultures/celebrations associated with their players.

For costume, Autism Axolotl. The hubtitle could be Autism Speaks like on the shirt it would wear and avatar would be the blue puzzle piece thing you said

Please not an axolotl, what about the autism frog, or the autism armor stand skin

Greedy corporate claiming that they’re “helping” autistic people when they’re the source of almost all the stigma we receive.

Ohhh I actually remembered seeing a video about that a long time ago, you’re absolutely right there are so many companies? Corporations? Organizations out there that all claim to be helping Autism, and maybe at one point they did but are only in it for money now.

I really don’t want to start any controversy, as I am not a representative of the autism community, but yes please please do the research for yourself and make sure your supporting organizations with genuine intentions. 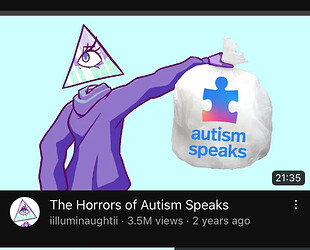 This was the video I had seen that (I think?) did a good job of explaining the problem with how autism is represented today.

(I’ll delete this comment if I posted something controversial or inaccurate, by the way)

as someone also on the spectrum to an extent, autism speaks is awful, and the blue puzzle piece represents them so id rather have the rainbow infinity instead (which is another way of representing people with autism)

seconding what omega said, autism speaks is a terrible organization, if any symbol were to be used it should be the rainbow infinity sign, or just don’t suggest that kind of representation at all where it doesn’t make sense to have it
also

Since I’m applying for Helper in December 2022, And Hoping to Be the 1st Hive staff with Autism, i would like an Autism awareness month event (maybe from March 26th- April 3rd 2023 since April 2nd is Autism awareness day)

chances are you probably wouldn’t be the first staff member with autism, there are a lot more autistic and neurodivergent folks than you’d think, mostly bc not everyone feels the need to put it out there publicly, since it isn’t anyone’s business whether you have a mental disorder or not.
especially when you’re in a position to potentially be discriminated against.
it’s something you really only share with family or close friends you trust not to screw you over regarding it.

I think this is a very good idea the staff cant deny you wishes, surely?
Also good luck on your application!
Tips:
100+ games played on every gamemode (why I havent been accepted)
Be nice and polite
Be Truthful

Also maybe this should be decorated in the arcade not main hub why? Because it would better in arcade for decorations!

Very True, Why didn’t i think of this

Oh from the other posts i know there are more worst companies for autism like avichable or proud moments im going to tell you right now that there are predators in achiveable bevior strategies! Plus the staff in proud moments dont even listin to you and so this should prove that autism speaks is not the worst company ever and im not sayin autsim speaks is good eaither u guys r right that some organizations want some money and pretend to help autism but other then that stick wit my idea decoate some symbols in the arcade hub

Great suggestion Pizzaboy! As someone with autism, I do think they should add something that

Maybe a hat With a Blue puzzle piece

This will mean a lot to me

As a 3d artist, I’m going to model a autism awareness hat, and a hope you all like it