Add the egg reaction back 🥚

Idea:
So I recently saw some old posts and saw people reacted with an

so why is it removed? We should add it back if this a dupe please tell me

[Include any other information that you think is relevant here]

Oh it was a dislike? Oh I thought it was just a meme

This is already a dupe, but I wouldn’t worry too much. ClankStar closed the old one as the community didn’t want negative emojis.

Same tbh. I had to do some research lol.

It was a meme, but it was then used as a dislike button in a fun way…tbh I hope it comes back (as well as the dislike reaction) but it would be used on a lot of specific users

“specific users” let’s be real, we all will just see Shubbles post and go “well this seems like a good time to use eGg”

I mean he is replying constantly, but then is not like he is posting in every single topic, so you guys shouldnt be targeting the egg reaction at him. Also I dont find him annoying, you guys are probably not used to seeing him on the forums every day

mate, joke (sorta). also how could we possibly not be used to seeing him every, single, day.

I mean he is usually more active at night according to my timezone and only posts in the forums games. Also he doesnt really have a discord account, so the forums is the only place for him to chat with others

and ur in singapore, the other side of the world to america.

and only posts in the forums games.

uhhhhh
dude
he posts every other post all the time, and in forum games specifically.
tell me, do forum games really have any place on the hive forums? kinda reminds me of why they removed general chat, because it was off-topic to the hive, and well 99% of the forum games are off-topic to the hive. so yeah, they should at the very least get a limit, as i had suggested here, or get removed entirely.

i flagged my own forum game last letter of a forum user because whilst i had it on mute like every other forum game, i read over the replies for it at one point and noticed that shubble was a very frequent poster, and i was seeing things like this fsr 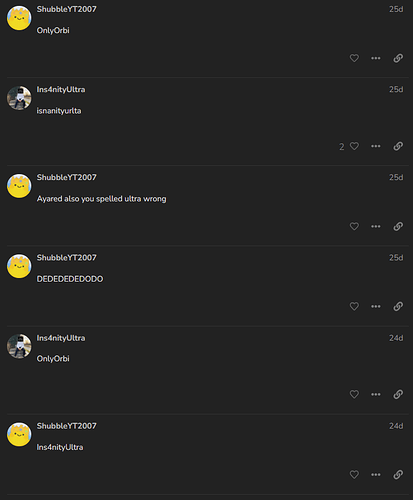 image700×847 46.2 KB
can’t tell me that’s not annoying
tell me, would you rather non-spammy hive discussion topics in your feed, or spammy forum games that have nothing to do with the hive in ur feed? and spoilers: there is a correct answer
also take a look at this which was sent to me by hudson at around midnight ur time today 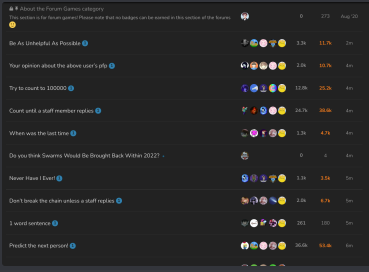 also, just a tip to everyone, if you don’t like seeing shubble in ur homepage, put forum games on mute. lotpw and pyrph have been closed, so there’s no real reason to have forum games not on mute anymore
did i leave, or not? eh whatever, i’ll just post replies i think need to be said, such as this one2

I am not from india

oh wait ur in well… i’m not 100% sure but all i know is that you’re in asia, and that still proves my point and all that matters

is kinda turning into that

was also that for a bit.

so uh besides the spamming, is there any more reasons why you guys hate shubble. Or maybe if you guys want, I can try to pm shubble on the forums, and suggest him to just try to reply to 1 to 3 forum games per week, and limit to only 2 to 3 replies per game

if not, maybe we can work it out by recommending him not to reply too much in the forums in a nicer way, instead of hating him

i- first of all, none of us “hate” them. second, what i said was a joke. why would i unnecessarily dislike someone’s post?

the only other thing which personally annoys me about them, apart from excessive posting, is unnecessary posting, like, just boring posts which don’t need to be there. something which you’ll scroll past and won’t look back on, ygm?

you don’t need to do that, they’ll see this and if they’re smart they’ll take something from it.

yeah, not a big deal, like Sir Joe said.