I’ve seen a lot of add spleggs but i haven’t seen any of those is suggestions so here, Hive please add Splegg, people ask for spleef and on java you have splegg. Splegg could be in the Hive’s upcoming mixed arcade and would be togglable whether it’s in a game of MA using swarms.

For those who don’t know what Splegg is it’s spleef except you shoot snowballs from a shovel to break blocks.

How I’d want Bedrock Splegg:
The lobby would be a large platform and the Parkour would look like it’s been destroyed, maps would include- Galaxy a map where there are different planets players can jump to to escape being destroyed; classic, the traditional spleef map and the last map I would suggest would be Skyscraper, a map where players are on a skyscrapers with 10 floors.
For supply chests: knockback one bow, block breaker boom box, ender pearl and knockback boom box.

I hope the Hive adds this.

It most likely will be coming in mixed arcade 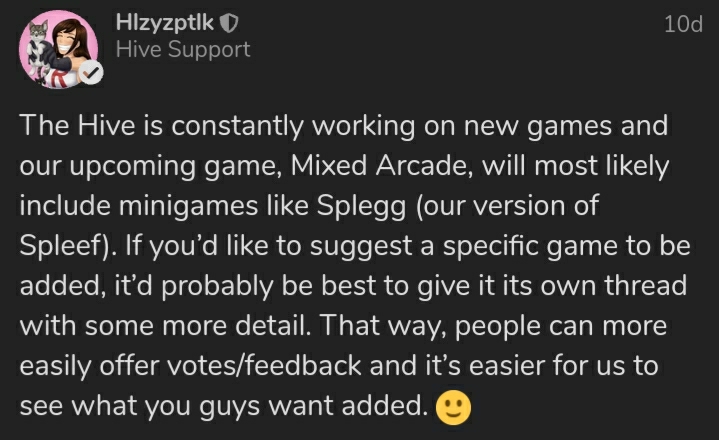 When writing it I thought it was confirmed but I corrected myself and my reply would be useless if it weren’t for the fact that it includes this funi:

Snowballs are coming in Splegg