Ability to "store" a replay game

Have the ability to “store/favorite” a game in like a favourites thing. This would allow it to be easier to try and find specific replays. 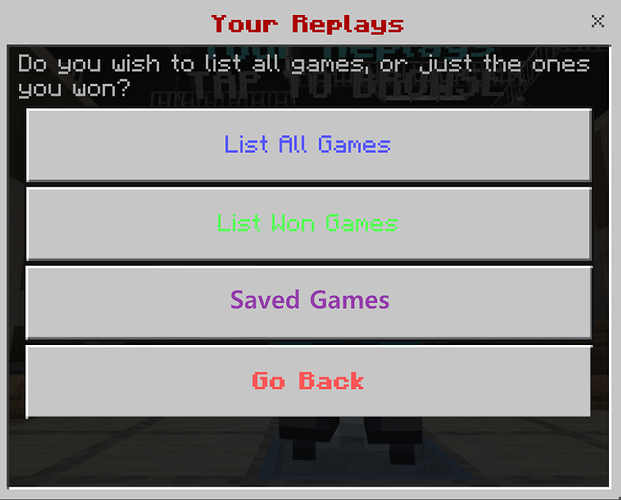 I don’t have replay pass, but I think it would be useful, I voted!

I’ve seen a suggestion for players to be able to “pin” a replay which is similar to this one, but I would absolutely love for this to be a thing.

I think this sounds great, but there should definitely be a limit.

Yes! I would want this

I’m going to go ahead and add on to this post, since I discovered it while having the same idea.

This feature would store up to 10 replays that would never get deleted. To store more, you would need to delete stored replays to make space. Once a replay is removed from storage, it’s permanently deleted.

Also, to help with finding which is which, we could have replay naming! This would only work with your saved replays, and you can set the name to anything you like.

Anyway, that’s all I have on this concept. Feel free to do whatever you wish with it!

thx for the bump. also great suggestion i voted

sounds like a great idea however it depends on if the server space can hold it, since there’s obvious hardware limitations for the hive itself

I love this idea! I voted!

The Hive already permanently stores all replays of games including Hive Partners (YouTuber, Streamer TikTok) and Hive Staff members (Helper, Moderator, Hive Team) as can be seen below. The replay in the example given never expires as there was a Helper in my game.

Having everyone to be able to store a few replays permanently shouldn’t cause too much harm therefore, however I could be wrong tho. 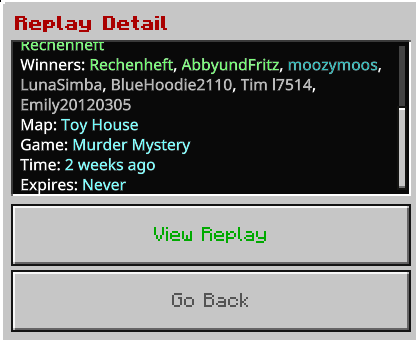