Why is survival games the least played game on the hive?

this is constructive, I am being a law abiding citizen of the hive while writing this, please dont lock this thread plz

Survival games is the least played game on the hive, but I always wondered why. Survival games is one of the oldest and long lasting games on all of minecraft. Yet people would rather play death run or drop block despite the fact that the hive has the largest pvp community on minecraft bedrock. If you think you know why please comment it, but here is what I think.

My opinion: I think the reason that survival games is the least played game on the hive is because it doesn’t appeal to the pvp community or the casual community which means its stuck in a limbo of sorts.

I’ll start off with why sg doesn’t appeal to casual players, I belive casual players dont want to play sg because sg is an extremely hard game to win. You have to be either the luckiest person alive or a godly pvper if you want to win. If you hide and avoid fighting you will have to fight to “that one level 30” who killed 7 people and opened 2 supply crates, to make a long story short, your gonna die. If you try to actually fight anyone you either die cuz ur unlucky, die cuz ur bad, die cuz he bow spammed, die cuz he had snowballs, die cuz he had cobwebs, die cuz u got third partied/cleaned. IF you win then good job, now do that like 3 more times and then die to “that one level 30” because even though you had good stuff they had 6 snowballs and 1 year of experience 1v1ing tryhards. You see how the odds are really stacked against the below average player. 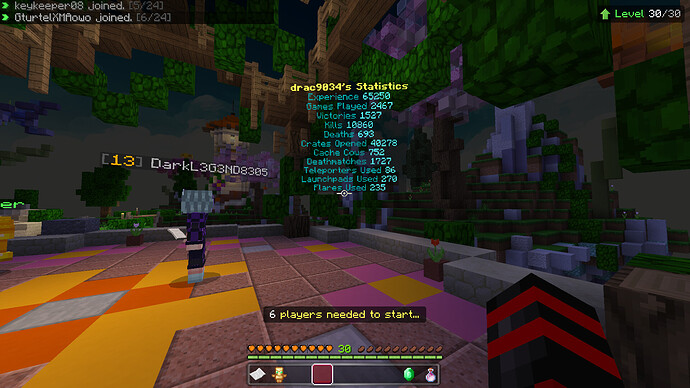 I belive sg doesn’t appeal to the average tryhard because its boring, as someone with 10860+ kills and 1527+ wins, I can confidently say this game got boring a long long time ago to fight the average noob all you have to do is press left click and hold W and then throw a boombox when they inevitably start running away even though their is no chance that they will never win AND even though they are just increasing the chances we get cleaned which will lead to both of us dying anyways (Im salty, I know but go through this same thought process over 10000 times and you will be too). And then after you get through the ocean of players who will surely become good players one day but as of right now definitely aren’t. you run into another level 30 player. Now, the chances this player is actually good is like 70%. the chances this player isn’t just gonna bow spam you and run away for 5 years are like 30%. And then the chances that this player won’t just die because they got unlucky and/or targeted are like 60%. Now, if you actually run into a good level 30 player who isn’t “slightly anoyying” and you actually get to 1v1 them, the chances you get cleaned are like 50%. And while I didn’t pay attention in math class I belive that this means your chances of having an actual fun 1v1 with a good player are around 0% so have fun with that i’d rather go wait for letsgame.today to have more than 0 players.

No offense but where’s the constructive part. There’s not much the hive can do about there not being many good players right?

I agree with a good amount of points laid out in here.

SG is a gamemode that lacks a large youtube community presence. However when it was first released nearly 2 years ago, hive youtube wasn’t big at all, and the server didn’t have many players, so this isn’t the primary reason.

I think the primary reasons are this: Skywars is a more flexible gamemode that allows for various strategies, and that you can win via luck. Treasure wars is a flexible game that you can’t get very lucky, and Survival Games is a very rigid game that only has a few strategies work, and although you can get lucky and get some kills, winning the game with pure luck is going to be hard.

Unfortunately I don’t think there is anything the hive can do about it, hive sg averages close to 1,500 at it’s peak, cubecraft usually is around 600, lifeboat rarely cracks 200, mineville is irrelevant, and their sg might not even exist anymore, mineplex straight up got rid of their sg game, and galaxite doesn’t have sg, chronos is more of a battle royale mode.

Hive sg might actually be the most lively sg mode left in minecraft as a whole, it’s just a dead game, which is unfortunate, as I feel a lot of people would like it if they understood it better

I agree with you here.
SG is indeed very dead. Though my reasoning isn’t not getting good players to fight with/ against. It’s because the game gets repetitive after 5 or so matches. There are so many reamers and hackers in Asia SG. In sky wars the games have much more difference. Almost every game I play in SG has the same strat. Loot chest, kill player.

I main tw because it has good competition and the games almost everytime are exciting. It helps in grinding when you have someone other than noobs and hackers in a game and actually get a thrill of playing

I think that it also doesn’t appeal to the pvp community because of people running infinetly. It is also too hard to win for some players because of lack of pvp when fighting that 1 guy, or gamesense and not getting cleaned when fighting a leather

My opinion is that, it is infested with PC players, and most of them just tryhard, for a mobile player, I rarely get wins, only 4 victories, my suggestion is that, improve the PBMM in SG so that more and more mobile and console players actually would go in there and actually enjoy the game

Those are the reason why I dont play Sg, however I will say in regard to my first point Mobius is not laggy at all. The rest are, idk why.

Usually at least one sweat you destroys you

shhhhhhhh…Are you trying to get this thread locked?

For deathrun, it’s a 1/6 chance to win. Winning is counted as finishing top 3, and 2 deaths are chosen out of the 20 players, meaning 18 runners and 3 winners.

I assume pbmm would be harder to implement in sg because the size of the lobbies is larger.

Deathrun counts as a win if you simply get to the finish, I know how deathrun works lol, I’ve only won about 1,500 games or so

oh shoot you’re right, I just tested it by getting 4th and my monthly win count went up. I always just considered top 3 a win lol

Platform-based matchmaking is enabled in Survival Games, and is active as long as there are over 300 players playing a mode (solos or duos).

I think the reasons sg isn’t popular are:

It only has a duos and solos mode, while tw and sw have solos, duos, trios and squads. Me personally, I find playing with a group of friends is more fun than playing alone or with just one.

It gets boring and repetitive.

Cleans (though this is somewhat prevented with health on kill, it still happens).

Hey,
since this game is, like you said one of the oldest game modes that’s been ever presented in the Minecraft history, it could be likely, that there’s just no interest in SG anymore.

But just in the last feew days I’ve switched from Java Hive to Bedrock, I noticed one big thing there, when I started to play SG:
The huge skill gap in between players, mostly affected PC players vs Console and Java vs Bedrock too.

Since PvP is wayyy easier than on a console for example, you’ll be getting just rekt in no time, if you can land a good combo. Also much more experienced players are usually abusing with like over 35cps and the enemy has 0 chance to win against yourself. I’m myself just started today playing SG and It’s just seriously boring after the 20th round.
And no, SG is absolutely not a hard game to win if you have the right setup, I get myself guaranted into deathmatch and can only loose a game, if there’s a secound PC player or getting sandwiched.

any completion is a victory, but only top 3 counts for win 3 games quests and other similars