Why are reports only allowed on "Discord"?!

Therw are waaaayyyy too many hackers in Hive and you need to use discord for reports?! No thank you. I’d prefer it being like others, like maybe doing playhive com/reports and do it there. Lifeboat also did it on /reports on their website, as well as others. I am very sorry, but I am really not happy with the Discord report limits. Please make playhive com/reports (Did it without a . to avoid it making a link) a thing. Thank you

Just a quick note - Lifeboat’s website report system is actually pretty new, before that they had it on their forum with a dedicated category setup as well as a plugin that helped organize the thing. They switched to the website form when the forum shutdown was announced.

I’d argue that Reports if anything is more suitable for a forum. On a forum it’d be harder to accidentally miss one since it won’t be drowned out in other messages, and from a moderation point of view it’d also easier to organize and clearly mark which ones have been dealt with already as well. Worth noting that when Lifeboat switched it’s reporting system off their forum (it was shutting down) they chose to set up a website page over a Discord system. Discourse also has some useful plugins in this area that could help make forum reporting more streamlined.

But not everybody had easy accessed to forums or knows how to use them .Discord is way easier to use and staff are not on forums as much as they are on discord

That’s a fair point I suppose. The staff not being on here is a whole 'nother topic by itself (though kudos to the Hive forum community for not needing much mod intervention). The way I see it you could still have a Discord channel for requesting admins/helpers to come into your game as well as a more detailed reporting system here. Also it should be noted that there is also a fair amount of people that can’t use Discord either.

As for your second problem - you can mute certain categories so they don’t notify you or anything. I don’t know if it’ll hide them permanently, I’ll have to check that.

Why can people use discord though.there is no reason other than parents not wanting there kids to use the app.to not be able to use it

It depends… Mudkip here is just one example and previously also Sunny (banned here now too). Though I suppose all this is for the owners to decide anyways and they don’t seem to check forum suggestions much.

I know that, I was speaking for the suggestion in general. Also Mudkip specifically is 13, just can’t have Discord if I remember correctly.

Double-checked on muting categories - it also hides them from the Latest and Categories pages, so that’d solve that particular problem.

The response time will be faster on discord that it will here and judy think about how long it would takes you to type a report on here .while typing it out here the time the game could end and a hacker could leave .on discord you only have to write like a sentence

Oh now I see, my bad I forgot to clear up when I thought they’d be used. My suggestions for a forum system were more for when the hacker’s already left or when an admin/helper didn’t respond in time and you have evidence of the rule break (video for hacks, screenshots, etc.) so that they could be handled even when offline. I’m not 100% sure how Hive operates in terms of offline punishments though.

I’m still in favour of keeping a Discord channel around for just telling an admin or helper to come onto a round since a quick response time is necessary.

Need to head off now but thanks for the good discussion, interesting to see a contrasting viewpoint on this matter.

Also Mudkip specifically is 13, just can’t have Discord if I remember correctly.

Correct, just because mum doesn’t like me on Discord is why.

We should Have BOTH to make the people who don’t have access one be able to report on the other, like @MudkipLover2005’s case, he cannot access discord and that does not mean he should have to deal with hackers alone 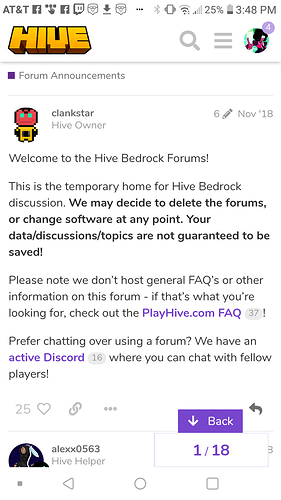 I’m sure it’s just a spelling mistake, no big deal.

Anyways, it is a good point that the they might not want to add something like that until they’re sure of whether they’ll keep the forum. However it’s been around for 6 months now and I believe Jollyjax said once on Discord that they don’t currently have any plans on taking it down though I may be misremembering. I’d like to see more additions to the forums though personally.