Which Sonic Marketplace skins should be allowed

Sonic skins recently stopped being supported after the pack’s update, and the skins were being planned to de-exempt after the event apparently. This is an inconvenience to people who want to dress up as Sonic characters but don’t have access to custom skins (like Console) (I don’t have a major problem with this since I’m on computer, but I’m making a suggestion anyways)

I think that SOME skins should be exempted, but many skins definitely staying unexempted.

The skins that should be exempted are the characters with good height and not AS much extending 4d parts such as: Amy, Espio, Metal Sonic, Metal Knuckles, Blaze, etc.

Some skins are a bit hard to decide the fate of, like some have a bit of 2d extended parts to them for other features like Rouge, and characters with a big amount of headspace like Sonic, Shadow, Silver etc.

I’d like to see at least a few of these popular ones exempted again so it’s fairer for console players that would wanna dress up as them (even though this is being written by a pc player).

I’d like to see the same balance of exemption as the Ducktales skin pack as the Hive accepts wearing Launchpad Mcquack who is pretty bulkier in game but exempting obviously extensive 4d skins like Gizmoduck.

All players who were on the Hive for those two weeks had a chance at getting some sonic related costumes for all players to wear as Unimaginative said.

So the Nostalgic Trio only
PS, call me Yellow.

full aware of them, this is just for the people who missed it or want to be characters that AREN’T them

Yeah it’s pretty sad for those who missed it

I don’t think the Hive has a way of updating skins that phase through the armor visually. If you haven’t noticed, some of the costumes that are slightly big can have parts of this costume hidden underneath armor to make it fair for other players (unless the costume is really old).

Unless The Hive can do this for marketplace skins, then I don’t know if they would consider adding these skins back so that you can wear them.

Very understandable. Also, I notice that the armor (like helmets) hide the extending parts in regular worlds. Is this modified for them to go through helmets in servers for gameplay reasons like hitboxes?

Does that really happen in the regular game? Now I am starting to second guess myself if my point is accurate. This goes to show how little I play the actual game LOL

So this is the Shadow skin in a regular survival world in a full iron set. The helmet covers the quill features 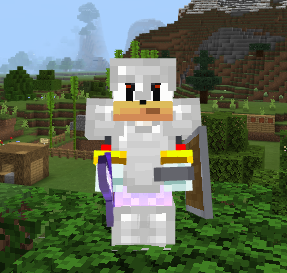 This is a screenshot of the Shadow skin with a helmet for a meme I came up with. As you can see, they look like diamond eyelids