One private server per day. Seriously?

I think that there should just be a cooldown per private game of around 30 minutes and for Hive plus a cooldown of 15 minutes. This would make players who play a lot a reason to buy Hive Plus while also not ruining the awesome server that Hive is for people with less accessibility to ranks.

I think that one private server per day is stupid, furthermore having to pay for Hive Plus to get only 6 servers per day is even worse. Hive should rethink their greed for money to try to make a better server.

Welcome to the hive forums! Enjoy your stay! 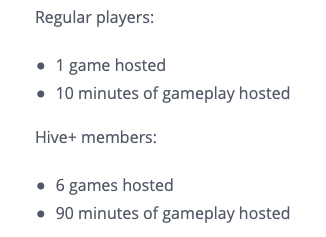 There is a reason to buy Hive + not just more custom servers. Also maybe not a cool down of 30 minutes. but I would say maybe 2-3 custom servers for regular players. Plus they aren’t greedy for money, its just a good marketing idea.
And (in my opinion) I think the reason they don’t have more for regular players, is because they don’t usually play on the hive. They give 6 cs to hive + because they will play more than regs do.

I am done, please correct me on anything I got wrong (cuz I know I did get at least something wrong.) and thank you for listening to my tedtalk.

Their current model is very fair

yes hive+ is only for the custom servers, TOTALLY agree with u, uhuh

it’snot like there are other perks coming with hive+, nope

hive+ is just a ‘perk’, not having it doesn’t stop you from having all the ‘basic’ permissions, there is no ‘exclusive’ games for hive+… cough Pixel paradise… the server isn’t unplayable and ‘not fun’ if you don’t buy hive+

Hive+ is worth it.

Hive+ doesn’t give you only 6 games

If you were to manage you can play multiple games
Its just 90 minute limit so if you manage you could play 10 games or 20 games or more if you can manage.

i think they only give you a certain amount of custom servers a day is because the cs needs serves to run. servers cost money. hive needs money to keep servers running. the more servers they have the better the hive can be. no they are not greedy, they need money so they can get people like me and you into more games

When you ‘create’ a custom server, you’re assigned a full server for private use. The match is finicky on this, but generally, the less players in a single server the more expensive it is for us to run. As the majority of custom servers have between 2 and 6 players in it, we need way more resources than if all those players were in regular matches. As such, paying customers get a higher quota, as they’re the ones making everything possible.

Calling this greed is quite unfair - you don’t see Microsoft giving you a free infinite Realm. Even server hosts that are ‘free’ have tons of restrictions or adverts. Infrastructure is among our highest expense; money has to come from somewhere.