No Controller/keyboard players in mobile queues

I know that matchmaking is a thing on the hive, but it’s really flawed… Players can easily just plug in there keyboard or controller and then play on mobile/touch servers. This is really unfair and it NEEDS to change because all the pvp games is unplayable if you are a mobile player

I asked them and they said that they were PLANING to invent it, not working on it.

Also, if it’s not possible to check if someone have there controller or keyboard plugged in, then just make a rule that you aren’t allowed to do this.

And if someone still does this can you just report them, it’s really easy to see if someone isn’t playing on mobile (examples: if your opponent is hitting in the air, crouching really fast, changing the camera and attacking at the same time, being able to jump bridge and much more).

just make a rule that you aren’t allowed to do this.

hey its not so bad people do it so they can play , like if someone cannot tap and play because of some disability/uncomfortableness they can plug in a keyboard ( this is an example it may not occur)

if your opponent is hitting in the air,

ever heard of split controls??

how do u know they are changing the camera

1 I asked a moderator on the hive discord about it

2 I don’t think you really understand how unfair this is… it’s super hard to pvp on mobile and even if you are a good mobile player is it almost impossible to beat a player who is ok at the game and plays on a keyboard or controller.

3 You can’t hit in the air on mobile, it does not matter if you have split controls

4 what I meant is changing the camera and attacking at the same time. You can’t do that on mobile (and that is one of the reasons mobile sucks for pvp).

We are considering it and we have mentioned it as well. It will take some time to develop and implement it but we will surely do something about it. 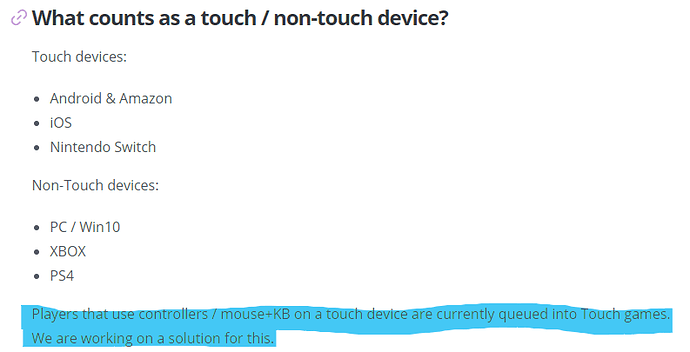