In the new blog post by the Hive they said this. 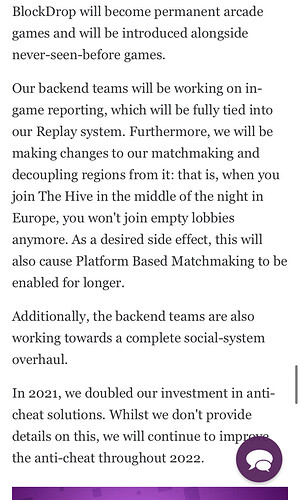 I believe they are gonna add a region transfer like galaxite where the server deas not make you leave and rejoin but is like joining a game (I believe this is the case. Im writing this in the middle of nowhere)

This could potentially mean that regions like Oceania and South Africa can be added. We know that the Hive stores data from where players are joining. If they get a few servers then players can rather than now play in 300 ping (: we can play in servers here. When there are enough players from these regions.

How it could work

When a player is from for e.g. South Africa then when there aren’t enough players from there then the can play on EU with a message every game saying

Do you guys think that they will do this.

We have no current plans for new regions, this is currently unfeasible technically and financially. As the post lays out, we simply plan to make it easier and more intuitive to play games on less busy regions at certain times of the day.

About how much does each server cost? Does it vary with each country?

I don’t think they can give exact numbers but they would have to pay 25% more for a region with almost no players. And it’s pretty hard to find good databases in other countries.