Let’s talk about one of the worst hiding places you could pick on Manor.

Now generally, it’s actually a decent hiding spot, unless you’ve seen it recycled over and over again - that’s when the spot becomes bad.

I’m talking about the secret staircase bookshelves, these bookshelves are thick enough to cover you unless someone like I decide to come along, and slash through every bit of the bookcase.

To be fair, I won’t discredit this hiding spot since it’s good for ‘clueless’ murderers who may not even think to check of this spot or know the map well - it’s probably a guaranteed victory then. I just want to speak out this popular spot that a majority of the final survivors like to choose.

For me, my weakness as a seeking murderer is people hiding up above. I don’t usually look above (and if that final survivor had a bow, I would most likely loose RIP). The only problem that comes with above is that it really opens you up to being murdered easily by the sword (if in reaching distance) or the nether star.

For now, a quick tip to the hiders of MM. Don’t hide unless you really are insecure of your skills to kill the murderer. I think it’s better to give yourself a chance at collecting the coins or playing as the sheriff and not hiding. Hiding is more likely to make you lose your game if you have no bow so, only turn to hide tactics when you have a bow and don’t camp in an obstructing place like the bookshelves. You don’t want to be the last innocent alive with no bow so give yourself a chance at that.

Other than that, do any of you guys have a spot that you find ridiculously easy to get the innocents/sheriff in and/or are overused by the MM community? I’d like to know!

SCROLL DOWN FOR GAMEPLAY VIDEO: 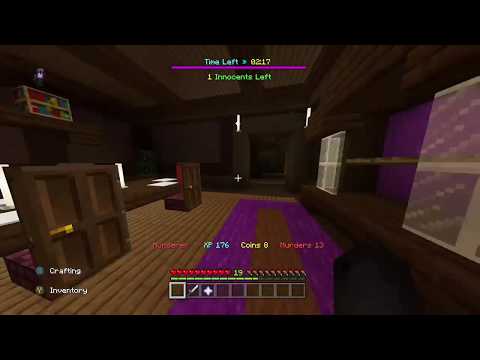 (this is the gameplay that inspired me to write up this post, remember kids - do not get smug and taunt the murderer…you never know if you’ll get slashed straight after sending that message