Hello! These minigame experience charts are designed and created by myself. Please note I, SnowflakeTM, have never been affiliated with the Hive Games Team. Despite my absence from the Hive Bedrock community, this thread is still updated whenever a game or update is released. Currently, this thread contains information for seven permanent games and five limited time event games. If you want to know how much experience each game action grants, I suggest looking at the " How do I gain XP in each game?" support page.

Link To Make Your Own Copy Of Calculator

The calculator has three basic parts to it, the Maximum Level, the Level Scale XP, and the XP Level Cap. Once you enter these values into the document, the sheet uses functions to determine all of the level requirements for the information you provided. This code simply uses formulas provided by Google Sheet and tons of if statements. Do not edit any of the information in columns A through D as it may cause errors. If you have any issues using the sheet, please let me know as soon as possible so I can fix it.

55 Likes
How does Experience (Levelling Up) work?
Deathrun | I am 3/4 there (levels)
Change the mini me gravestone to be the level 80 reward
The Question/Link Hub
Use this topic to keep track of good posts
Treasure Wars for Dummies (A Treasure Wars Guide)
How long would it take to max to LV100
Who’s/What’s your favourite
Deathrun experience for each map
anon14919351 April 11, 2020, 4:02am #2

This is amazing! Welcome back to the forums!

Awesome, thank you so much for making this as I am sure this will help a lot of our new players!

Welcome back to the forums, it’s awesome to have you back!

yes i have been waiting for 5 years

Welcome back! By the way, that looks awesome.

The newsletter is currently being worked on. Since I was gone for January to March, it will likely cover the months of January 2020 through April 2020 ending with the Easter Event and hopefully Swarms if that releases this month. More information to come about when this will release at a later date.

Snow made a new bot to get these charts on discord. He edits the topic for some reason so people don’t see it instead of just making a reply smh. Try it, it’s cool like all things he makes.

Game Experience Charts arrive to discord in this bot. The goal of the bot is to share all of this information which has been collected from this forum post into a broader atmosphere. All information that is listed on this post can easily be found on the bot, and the calculator has even recieved improvements to get more information than maximum experience. Currently, the bot is in testing stages. 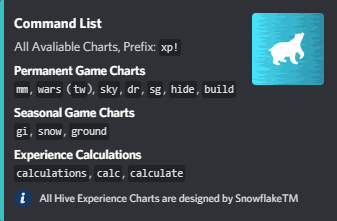 Privacy Statement The Hive Experience Bot collects no user data or guild data meaning the bot is global. My goal is to simply provide information, with no data collection allowed. When you enter a command, the bot simply fires off a response embed. This also means that there will be no setprefix command at the beginning. If the bot grows significantly to the point where most players want it, however, I will add it.

I was considering making a post about it but didn’t. I figured that people use this for reference commonly would see it. I could have also created a new thread except it is the same information, just on an alternate platform. The bot did not really take that long to code, causing probably a few errors here and there, so I personally did not think it was worth to bump it. For example, calculating xp!calc 2 100 82 ? (Which would be to find how much total experience is needed for level 2 in murder) displays an incorrect number (-315,900) which I need to fix by implementing a check to determine if the level cap is less than the scale cap, and if so, use the arithmetic series sum to determine maximum experience rather than my alternate version which accounts for the scale cap.

From a coding standpoint, however, I believe the experience calculator built on the bot was way harder to design rather than the one here. I decided to add it since it is my most popular link on the forums. A bonus with the command is that it lets you search for any term rather than only the maximum experience. I would like to think of it as an improved version except it does not have all the specific level details unlike my preexisting calculator. Technically, someone could still determine the total experience needed for a level by decreasing the level_cap parameter. I personally learned a lot from designing this as it was my first time playing with math.js in a few years and was a good project to get back into programming.

Anyways good job, these kinds of things really help out the community. I’m grateful for you doing the things you shouldn’t have to be doing.

I am going to add this as a reply just for informative purposes. The calculator built into the discord bot technically runs on 2 equations, except one equation is manipulated three times to calculate each variable. The equation that I utilize for the base calculation is a simple arithmetic series sum formula combined with an add on to account for the scale cap. If anyone is interested, here are the equations you can use.

What do I type in for “xp level cap”? All help is appreciated!

This deserves a buzz approval

This deserves a buzz approval

It did recieve the Buzz badge a while ago now.
https://forum.playhive.com/badges/102/buzz-admin-approval

What do I type in for “xp level cap”? All help is appreciated!

The XP level cap is right here. (Skywars as an example) 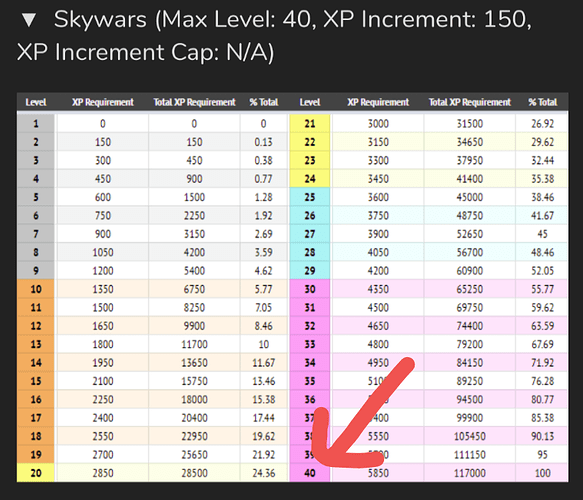 I’m not sure what you are referring to when you say ‘type in’? 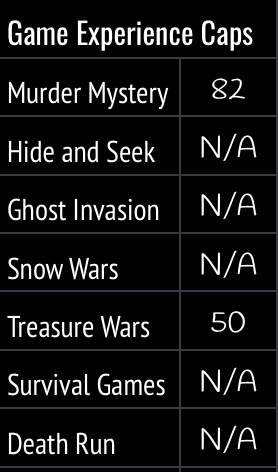 When I type it into the xp calculator you need the game experience caps, but then some just say n/a. Then it doesn’t work.

It is inactive as far as I know.

What do you mean by inactive

TimidSnow lost access to their Discord account and is no longer a part of the wider Hive community, so these charts will not be updated in the future

Orbixx I think I am not pretty sure bout that