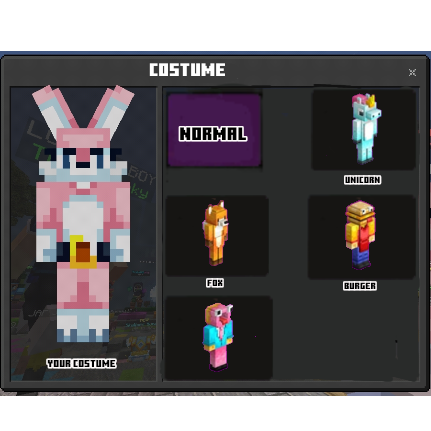 I think you may have confused something

I really like how you built the UI, it’s a really nice menu! Considering The Hive is updating the majority of their menus, this may get added in the future :o
I voted for it (:

This would lag the whole costume ui so much, for people who have tons of costumes…

I really love this idea, this is very wonderful idea!
Hive would most likely do this since they are updating their old UIs and making it new!
Have a nice day/evening

You have to think that all the textures have to be loaded at the same time. You can even see the loading time at the vote ui s.

I think this is a dupe Costume pictures

Ye, but you can imagen how long it takes to load 50pictures, if the voting ui takes half a second to apear.

me with 300 pictures to load

Technically I don’t think it can be considered a dupe as this one provided a design, while the other just suggested the raw idea.

its still a dupe, because theyre both basically the same idea, even if this one provided a design

While they’re the same idea, they suggest different showcasing ways, while I could be wrong, I don’t think it’s a dupe.

Only changes I would want is under the equipped costume instead of saying “your costume” it says “equipped costume” and “normal” says “unequip costume” or whatever it says right now, I forget exactly what it says lol.

I’m not sure if this would cause tons of lag, i’m not a dev but i’m sure a hive staff member will see this and answer if they know.

Also, what would go in place of the picture if no costume was equipped?

That’s like saying that your eating ice cream at 2 different places. It’s the same ice cream, but different view. So which means yes, this is a dupe because it is the same concept, only difference is this person has a picture