I see lots of Hive Partners’ channels which don’t have a Hive video for a long while. For example, PYSter11 just uploaded Hive yesterday, but the second recent video of The Hive was around 4 months ago. I don’t have anything against PYSter11 or others, but this should be a rule, so Hive has more content and becomes more popular (currently I’m trying to spread The Hive’s minigames on Minecraft: Bedrock Edition in Bulgaria, which explains why I have only one video, in foreign language).

I’m sorry if it’s a duplicate. I just wanted to show some activity on the forums.

well, hive partners have a life outside of video games. With school starting up in most places it would be harder for those creators to play and upload content. also, some partners just might be on breaks or have important business to attend too.

I’m not hive so I don’t know exactly how YT rank is given/taken away, but a hard policy on this seems quite unfair (some youtubers don’t have super consistent upload schedules), and someone with YT rank did make content for the Hive at some point, and that content has helped contribute to the server. 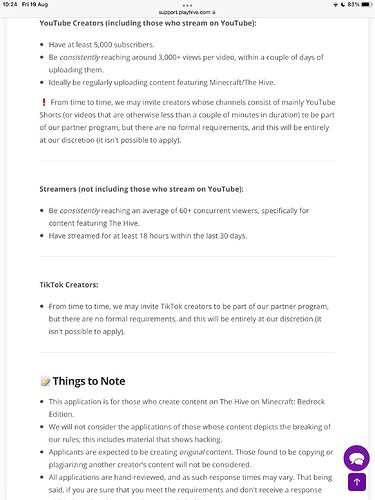 There is a multitude of reasons that somebody might not upload for a period of time, oftentimes it’s for reasons out of their control.

We also consider somebody meeting the requirements for our partner program in the first place a major accomplishment and contribution to the network; removing their rank after a short period of not uploading videos wouldn’t be fair.

We do occasionally remove ranks after prolonged inactivity, but this is mainly for security reasons after a partner hasn’t uploaded content for more than a year.